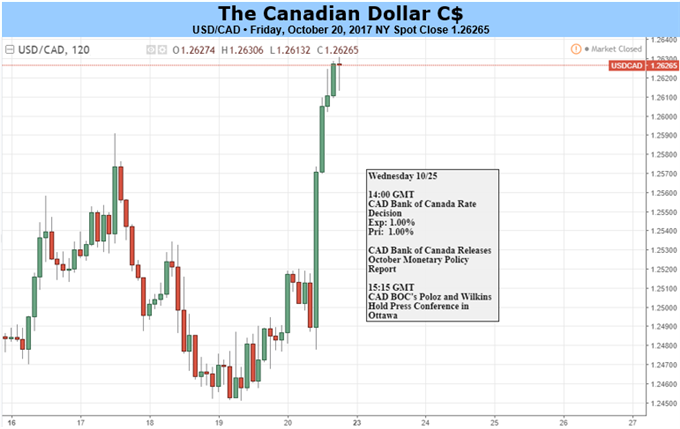 The Bank of Canada meets for a rate decision on Wednesday. And while there is little hope for any actual hikes at that meeting, all eyes (and ears) will be on BoC Governor Stephen Poloz in the effort of reading the tea leaves to see when the BoC might move next. This has become a burgeoning theme over the past few months as the Bank of Canada joined the Federal Reserve as one of the few major Central Banks that have actually hiked rates since the Financial Collapse.

While much of the world was watching the Euro or the U.S. Dollar this summer in the attempt of getting in front of possible rate hikes out of those economies, the Canadian Dollar ripped-higher by more than 1,700 pips as the BoC did what few Central Banks were willing to do with our current backdrop. When the BoC hiked in July for the first time in over seven years, they warned that another hike was on the horizon. Few expected how quickly that next adjustment would come, and at the Bank of Canada rate decision in early-September, rates were nudged higher and this led to another run of strength in CAD.

But that post-rate hike move only lasted for about a day: The BoC hiked rates on September 6th, and a low was set in USD/CAD on September 7th. Since then, it’s been largely bullish price action in the pair as an upward-sloping channel has built-in to a longer-term bear flag formation.

We’ve had quite a bit happen since that rate hike and since that low was set: A bit of recovery has begun to show in the U.S. Dollar, and while few would categorize that as a screaming uptrend in the Greenback, the move-higher is notable when looking at USD/CAD. But also of issue has been a soft patch of Canadian data over the past couple of months that have brought questions around the forward-looking hawkish stance at the BoC. We got the most recent pain points for that theme this morning, when September inflation came in below expectations (1.6% v/s 1.7% expected); and retail sales absolutely cratered in the month, coming in at -.7% versus an expectation of +.3% and a prior print of +.2%.

This complicates the backdrop for a Bank of Canada looking to further normalize policy. This also gives further reason to move-forward with caution, especially as they consider additional hikes in the not-too-distant-future. Also of consideration is the continued complication around NAFTA discussions. No additional optimism came-in this week, and talks continue in a rather troubling fashion for both Canada and Mexico. The U.S. side of negotiations appear unwilling to bend, with Canadian Minister of Foreign Affairs, Chrystia Freeland saying that the United States was taking a ‘winner-take-all mindset’ to the discussions. This is an additional negative factor for the Canadian Dollar that can provide some further drive to the bearish theme or, at the least, some form of tempering of any optimism that might show up.

The forecast for CAD will be set to bearish for the week ahead.