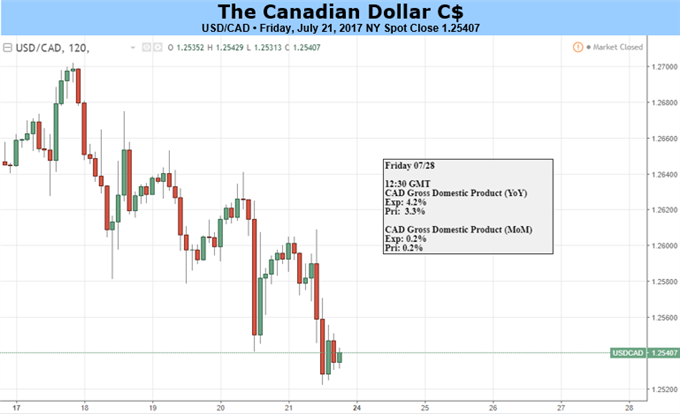 Ever since the Bank of Canada raised its overnight lending rate by a quarter of a percentagepoint to 0.75% on July 12 it has been tempting to take profits on the Canadian Dollar’s steady appreciation against the US Dollar that has been in place since early May – and that would have been a big mistake.

In little more than two months, USDCAD has fallen from 1.3789 to around 1.2540 currently, and fighting the trend would have been a good way to lose money. At some stage the rally will run out of steam but it’s noteworthy that since that July 12 rate rise, the first in seven years, USDCAD has continued to drop.

That’s principally because the markets were expecting the BoC to tighten monetary policy still further, albeit gradually, even before the latest economic data – and after the figures another rate rise on October 25, when it publishes its next Monetary Policy Report, seems highly probable.

The headline inflation rate fell to 1.0% year/year in June from 1.3% in May – dropping further away from the BoC’s 2% target – but two of Canada’s three measures of core inflation were higher and May retail sales jumped by 0.6% month/month rather than the 0.3% expected by analysts. This helped reinforce the Canadian currency’s bullish momentum and inevitably brought the 1.25 level into focus for USDCAD, even though the pair is now technically oversold.

In the coming week, one more key data release is scheduled: the GDP report for May on Friday. The month/month rise is expected to be little changed from the previous 0.2% but any increase above that would reinforce expectations that Canadian interest rates, and the hence the Canadian Dollar, still have further to climb.