Canadian Dollar May Hang Tough Against a Hawkish Fed 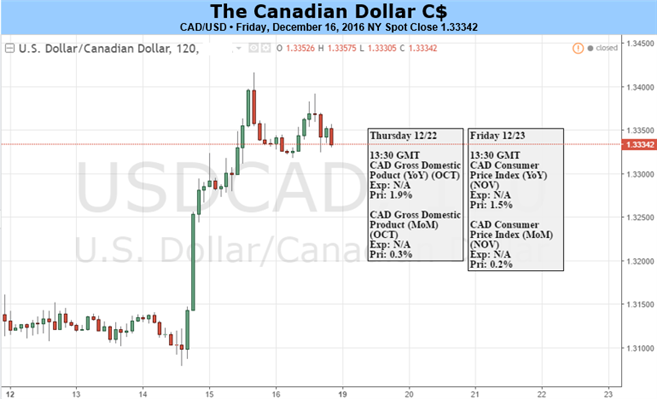 The Canadian Dollar weakened against the USD as did the rest of G10FX when the Federal Reserve signaled a more hawkish/ steeper dot plot than expected. The Canadian Dollar had Bullish momentum backing it going into the meeting on the back of the December 7 Policy Statement where the Bank of Canada noted that they are focusing on slack that remains in the Canadian economy and omitted the “at present” phrase when discussing possible rate cuts to stimulate the economy.

The backing off of dovish policy by the Bank of Canada disappointed many Canadian Dollar bears. However, when looking at the persistent relative month-over-month strength in the energy market and EM stability, whichdoessignificant trade with Canada, it’s easy to see why the Bank of Canada is backing off the aggressive dovish stance.

Last week, we saw an unfortunate combination for CAD Bulls of a compelling thesis for further US dollar strength alongside disappointing Canadian manufacturing sales that were negative again in October. However, next week will present a large slew of data for Canadian Dollar traders to consider into the New Year. While few are expecting fireworks regarding positive surprises for Canadian data, a print in-line with expectations would continue to see the Bank of Canada holding put as opposed to seeking easing policy, which may keep CAD bid in non-USD crosses.

Wednesday will present Wholesales Trade Data for the month of October, while Thursday & Friday provide the headline prints for the Canadian economy. Thursday will provide Retail Sales for October & the all-important CPI for November, which is slowing heading to and may eventually print above the Bank of Canada’s 2% target with the stability in Crude Oil. Friday will present GDP for October, with YoY expected to remain unchanged at 1.9%.

Canadian Dollar Traders should continue to keep an eye on widening or narrowing yield differentials. The Bank of Canada is doing their job in keeping the CAD stable, but volatility in sovereign yields will likely be a driver over the coming months.

Crude Oil is playing a large role in what could be the resumption of the Canadian Economy. As economic data is stabilizing (disappointing less often), the Bank of Canada is turning more neutral as opposed to dovish, and the Crude market looks poised for a stability above $50/bbl. All of this combined with the Fiscal efforts by PM Trudeau may allow the Canada to benefit greatly from the recent OPEC accord to limit crude production to support the market’s supply balance.

While risks remain given the uncertainty of future U.S. trade policy, the Canadian Dollar may shine as the beneficiary of a natural trade partner with the U.S. and a turning of the tide in energy markets that continues to play out.