After an OPEC agreement to cut production had come to fruition, the focus has now turned to Non-OPEC producers like Russia who agreed to support OPEC’s attempt to stabilize the Oil marketing by also cutting production. Over 14 non-OPEC members are meeting in Vienna where the recent accord took place. However, and not surprisingly China and the U.S. producers will not be there, which have a very high capacity of production that could continue to limit the effect of the OPEC accord to reign in global production.

While the effects of the OPEC and non-OPEC accord will only be known in the long-term, one encouraging sign for US Oil Bulls despite the fear that one producer or maybe more may try and capture any slack created by the accord is in the options market.

There has been an increase in demand for WTI call options with the most active being the 2018 December $80 Brent Crude calls. Shorter-term active options per Bloomberg are mid-$50 ($53-55) calls for January & February. While not predictive, this flurry of options action helps to show that there are institutions working to positions themselves to capture further upside should it develop in WTI. 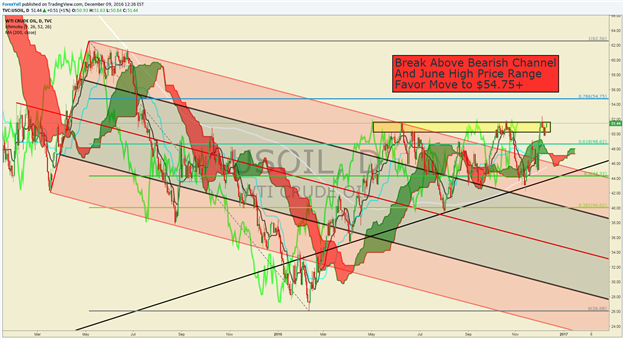 The support that we had been focusing on throughout the 2016 rebound and into 2017 was the rising trendline (black on the chart above) drawn from the first higher low alongside the 200-DMA (white). The other Bullish developments as we sit near $51/bbl is the price above the Ichimoku Cloud and a further separation from the bearish channel that framed price action for a majority of 2015 and 2016.

These technical developments put the burden of proof on the bears, and no longer the bulls. A breakout in price may be achieved if the price of Oil trades above the price range of the June high that is highlighted and extended on the chart with a yellow rectangle. Traditionally, rising support as shown via the technical tools mentioned above (trendline, Ichimoku, 200-DMA) into fixed resistance favor an eventual break of the resistance, which may launch Oil into a Bullish cycle as we move into 2017.

If the price can break above the resistance mentioned that occupies $51.60/$50.22, further upside targets are provided by Fibonacci analysis over recent price ranges. When looking at the May 2015-February 2016 range as well as Fibonacci Expansions over the recent October-November range, we see a confluence of upside targets near $54/bbl in WTI (CFD: USOil) with the 78.6% retracement at $54.75.

A failure of the price to break above the yellow rectangle would favor a move down to rising support that lies between $48/45. Only a break below this zone would take us from neutral to bearish. Until then, we’ll favor eventual upside.