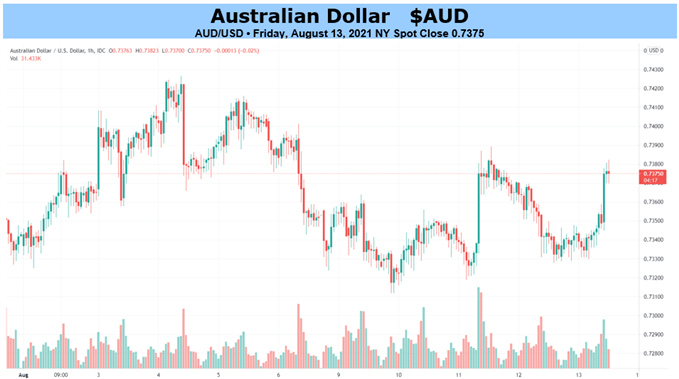 The Australian Dollar spent the week range bound, which is not a surprise given the lack of data and news flow. Some business and consumer confidence data released during the week did little to motivate the market and all eyes will be focused on the more significant data of next week. Locally, on Tuesday the RBA meeting minutes will be released followed by the employment numbers on Thursday. The RBA recently inflected a slightly hawkish tone and the market will look to the minutes for confirmation of the extent of their bias. This is particularly in light of the rising amount of the Delta variant cases of coronavirus emerging in New South Wales. RBA Assistant Governor Kent will be speaking on Friday and may provide further insight to the central bank’s stance.

The Australian Dollar is often seen as a bellwether for risk assets and with central banks globally attempting to begin to wind back extremely loose policy, The Australian Dollar may resume coming under further downside pressure after retreating from it’s high in February. Interestingly, other risk assets are mixed, with many equity indices hitting new highs this week, contrasting with many commodity markets that are well off their highs from earlier in the year. The chart below illustrates the out-performance of the S&P 500 against the AUD and gold. 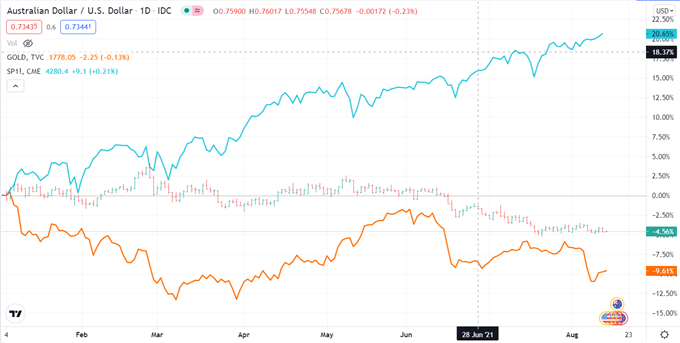 Looking at the AUD against this risk disparity suggests that we have a strong US Dollar driving commodity and currency markets and from a fundamental perspective, this makes sense, as the Fed are perceived to be behind other central banks in terms of the unwinding of stimulus that is keeping the US economy at elevated levels. The FOMC meeting minutes will be released mid-week and again, the market will be sifting through the minutes for an indication of the timing of tapering.

Meanwhile, the ongoing regulatory crackdown in China has continued to keep iron ore prices subdued. The Chinese Communist Party’s Central Committee and the State Council jointly issued a document this week that is far reaching and may have significant consequences for Australian exports to China. That is likely to add further weight to the AUD.