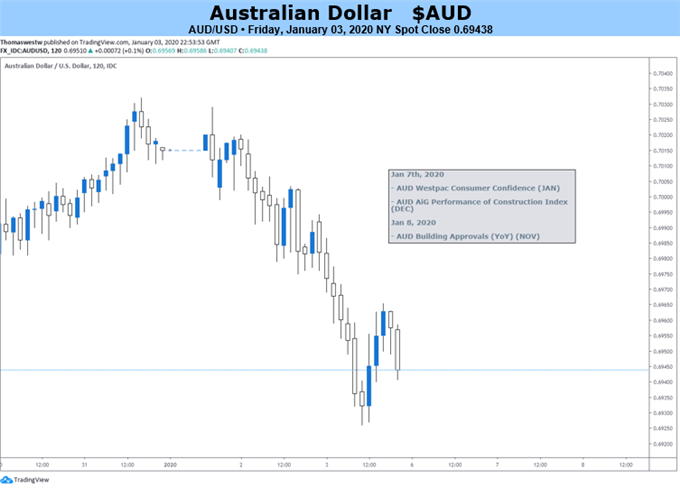 The Australian Dollar has been on a tear since early October, and its gains only accelerated as 2019 bowed out, can they hang on and even go further in a new year?

Well, much of them have come as markets became more optimistic that China and the US could sign at least an interim trade deal. That is apparently still on the cards with January 15 penciled in as the signing date. However, that deal itself will probably amount to no more than a truce in the war of tit-for-tat tariff impositions which dominated much of 2019. This alone is unlikely to justify the surge in risk appetite which has boosted pro-cyclical assets from global equity to commodity currencies.

Much will probably depend on the level of goodwill shown at the signing for a move on to a more ambitious, phase-two deal.

Not all the Australian Dollar’s underpinnings are international. The domestic economy remains quite buoyant by some measures, notably by its record of job creation. The Australian labor market continues to defy expectations of a rollover with November’s numbers showing a strong return to form.

Futures markets seem less certain than they were as a result that still-lower Australian interest rates are coming. However, inflation remains stickily low and some of the major Australian lenders still think that both lower rates and, possibly, quantitative easing, will be needed in due course. Clearly someone is going to be wrong here, but evidence to support either case won’t come this month.

Another unknown is the Reserve Bank of Australia’s attitude to current rampant Aussie strength. It probably doesn’t care for it much. When you’re trying to get inflation up, a strong currency makes imports cheaper and acts as a drag. Still, the RBA is unlikely to fight the market meaningfully.

Still, we won’t hear from it in the coming week, with no speeches or major RBA events on the calendar. Indeed, must wait until February for the first monetary policy decision of 2020. This promises to be a fascinating year for the Australian Dollar, but the market needs more data and it may take time to take off.

For now, trade drives and the currency is unlikely to fall far while the US and China are still talking. That said, the past two weeks’ rise has been sharp, and a little consolidation seems likely even if the overall AUDUSD uptrend looks safe enough.

Middle Eastern geopolitics have returned to haunt markets as the US strikes against Iranian-backed militias in Iraq and Syria. Intensification of conflict here could see a rapid move back into counter-cyclical assets like the Yen, at the expense of growth correlated assets like equity and the Australian Dollar. 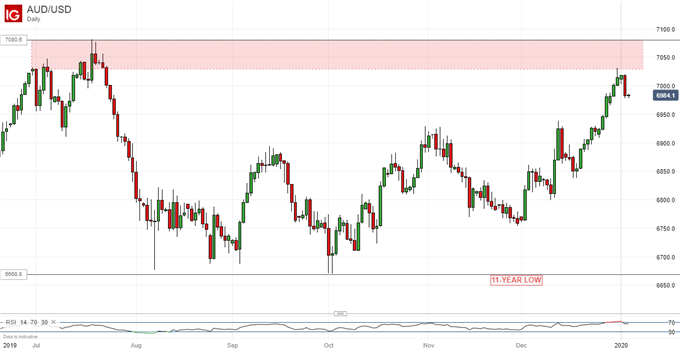