The Australian Dollar rose on Thursday as a strong November employment report appeared to banish the previous month’s weakness.

The overall unemployment rate slipped to 5.2% , better than the 5.3% expected. The big win was in headline job creation though, with 39,900 more people in work over the month. This trounced the 15,000 rise expected and made the prior month’s fall of 19,000 seem like a blip.

However, while November was clearly a much better month, one or two devils hung around in the detail. The economy only created 4,200 full-time positions, with the rest accounted for by part-time work. The unemployment rate remains well above the 4.5% level targeted by the Reserve Bank of Australia, too. and it remains highly uncertain as to whether this target can be hit so late in the cycle.

The minutes of this month’s RBA monetary policy meet placed heavy emphasis on the labor market. Interest rates were held at record lows at that time, pending reassessment in February.

AUD/USD spiked up on the headline figures but, strong as they were, this report does not quite lay to rest all the questions over Australia’s labor market vigor- for so long an unarguable bright spot in the economy.

This data series will continue to command strong market interest into the new year. 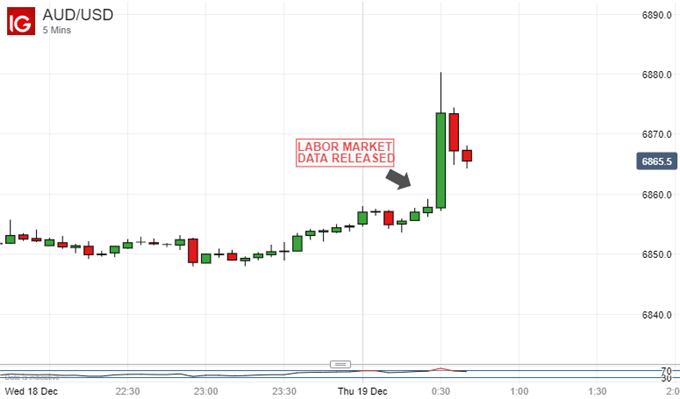 The Australian Dollar has risen quite sharply this month as the prospect of an interim US-China trade deal boosted global risk appetite. The return of the UK’s Conservative government with a strong majority had a similar effect, as it appeared to make progress on the torturous Brexit story more likely. However, AUD/USD has retreated since as investors have fretted an ongoing lack of trade-deal detail and the still-present possibility of a no-deal exit for the UK from the European Union. 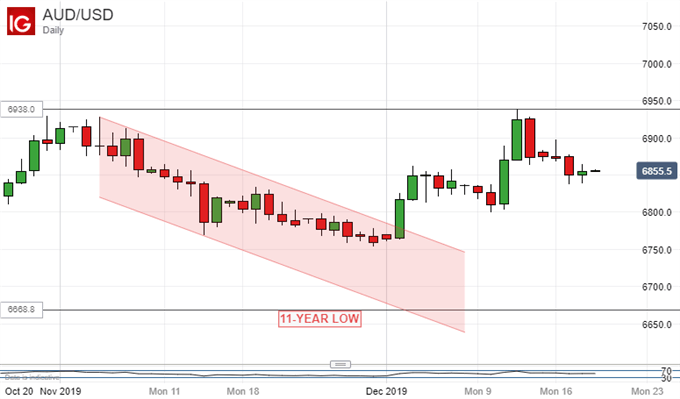 While the Aussie is often the plaything of such global risks, and indeed Chinese economic data, its domestic outlook seems bearish. Interest rates of course remain at record lows, with futures markets penciling in more reductions next year and some economy-watchers prepared to bet that Quantitative Easing may follow, even if the RBA has implied that the bar to this is high.