Australian Dollar Could Gain if US-China Trade Hopes Hold Up 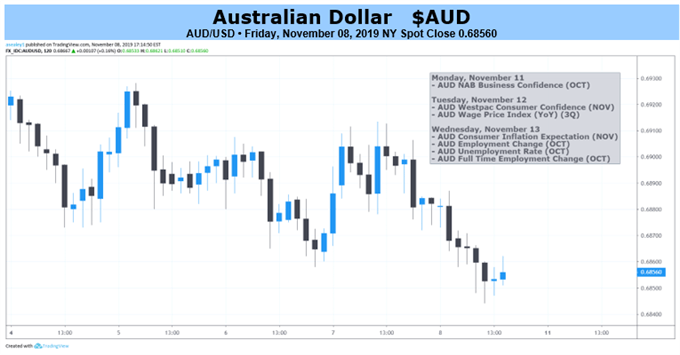 That’s not to say the local cupboard is entirely bare. Official Australian employment data are coming up on Thursday. The last report showed the jobless rate ticking down to 5.2% and continued a story of strong job creation which has long been one of the Australian economy’s bright spots. Assuming no drastic turnaround this week, keep an eye on the full-time/part-time split within the data as any skew toward the latter always has potential to blunt even a strong headline number. This in turn usually hits the Aussie, if not always for very long.

Keep an Eye on the RBNZ

There may also be some spillover from any action in the wake of Wednesday’s interest rate decision from the Reserve Bank of New Zealand. Futures markets have moved to price out the chance of a reduction in New Zealand’s Official Cash Rate, with early next year now favored. However, the RBNZ has been known to spring surprises and investors know it. It unexpectedly slashed the OCR by 50 basis points back in August.

In any event, the mood music around a US-China trade deal has improved considerably, with the White House appearing to countenance a roll-back of some tariffs in what’s being seen as a major effort to get an interim accord over the line. Of course, as anyone who has followed this story will know, it’s a tricky one and optimism can dissipate at any point.

However, the Australian Dollar remains close to highs not previously seen since July, having risen steadily from October’s eleven year lows, at least partly as trade-deal optimism has grown. AUD/USD is now as close to its dominant downtrend line from late 2018 as it has been since July 21.

Of course, it may well wilt again. The currency lacks much in the way of domestic monetary policy support. The Australian Official Cash Rate stands at a record low of 0.75% at futures markets think it could go lower yet, albeit with a little less conviction than they once had. These may be considerations for later in the year, however. The coming week may well see the currency quite well supported, assuming that mood music around trade doesn’t take a more somber tone. 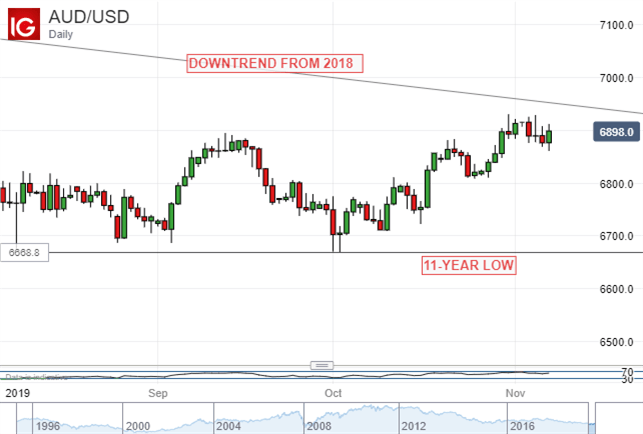