Australian Dollar Remains Pressured But May Get Some More Respite 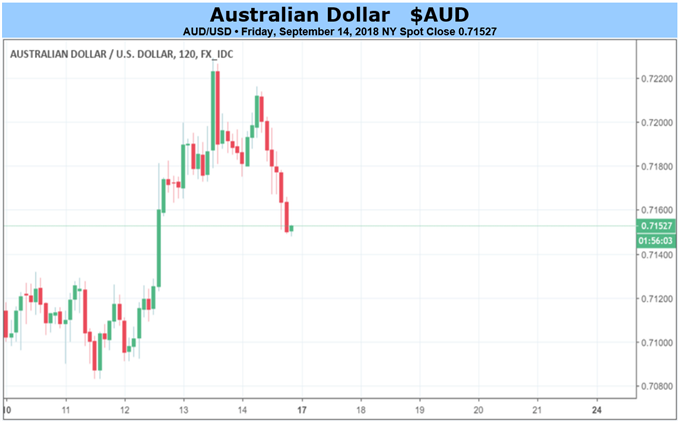 Blockbuster economic data bought the Australian Dollar some respite last week, but it might not be wise to hope for much more of this in coming sessions even if the long fall does not resume immediately.

For sure, official Gross Domestic Product numbers for the second quarter looked good. Their annualized 3.4% rise was the sharpest since September 2012 and well ahead of forecasts. This pleasant surprise for battered, rare-breed Aussie bulls, was followed shortly by yet another. August’s employment data showed job creation still running hot, with full-time roles expanding nicely.

AUD/USD even chalked up the rare feat of five straight sessions of gains.

However, the difficulties which have seen the Aussie under pressure all year endure. Yes, the domestic economy performing quite well. But inflation remains low, consumer debt is still very high and the interest-rate differential in favor of the US Dollar yawns, and will yawn still wider as the Federal Reserve continues to hike.

Moreover trade tensions between the US and China cannot fail to hit Australia, a country whose economic, security and political fortunes are perhaps uniquely tied to those of the two global giants. Even were that not so dramatically the case, trade tensions tend to it growth-linked currencies such as the Australian Dollar disproportionately hard.

For all the current economic cheer, no change is priced into Australian interest rate futures for all of next year. Recall that the Official Cash Rate remains stuck at the 1.50% record low which has already endured unchanged since August, 2016.

So, the Australian Dollar still has trouble enough, and that is likely to remain the case for as long as there is simply no evidence that domestic inflation is rising, or that trade is calming as a global worry.

Still, while AUD/USD remains a strategic short, it may not fall too much further in the coming week. So it’s a cautiously neutral call from me.