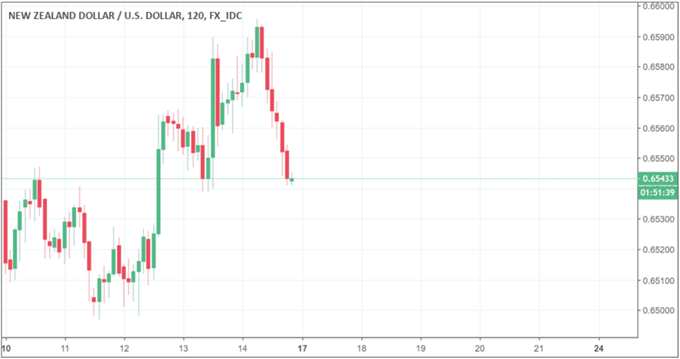 Have a question about what’s in store for New Zealand Dollar next week? Join aTrading Q&A Webinarto ask it live!

Heading into the end of last week, the pro-risk New Zealand Dollar managed to appreciate against its US counterpart alongside a recovery in global benchmark indexes. The S&P 500, Nikkei 225 and MSCI Emerging Markets ETF rose as reports that the US would propose new rounds of talks with China crossed the wires, quelling some trade war concerns.

Yet, New Zealand 2-year government bond yields were mostly little changed suggesting that the driver for NZD was the improvement in market mood as opposed to bets on the RBNZ rate outlook. Keep in mind that in August the central bank left rates unchanged and said that the next move could be up or down. Governor Adrian Orr than added that if growth slows further below potential, they would cut the official cash rate.

This brings us to the week ahead which contains the second quarter New Zealand GDP report. Growth is expected to slow to 2.5% y/y which would be the weakest since Q4 2013. However, local economic news flow has been tending to outperform relative to economists’ expectations in recent weeks. This opens the door to an upside surprise which could pour cold water on RBNZ rate cut bets.

Overnight index swaps price in a 30% chance of a cut from the Reserve Bank of New Zealand in February 2019. If those will be suppressed by a GDP beat, we could see monetary policy fundamentals sending NZD/USD prices higher. Meanwhile, as we saw with last week’s CPI data, the US Dollar could brush off softer mediocre-tier economic data ahead and perhaps trade relatively flat.

With that in mind it is tempting to offer a bullish Kiwi Dollar fundamental outlook, but the risk that Donald Trump rekindles trade war fears is a threat. This could reverse gains in emerging markets which would arguably send the New Zealand Dollar lower. He acknowledged last week that they are not under pressure to make a deal with China. This vulnerability thus leaves us with a neutral forecast instead.