Australian Dollar Unlikely To Get Much Lift From Crowded Data Week 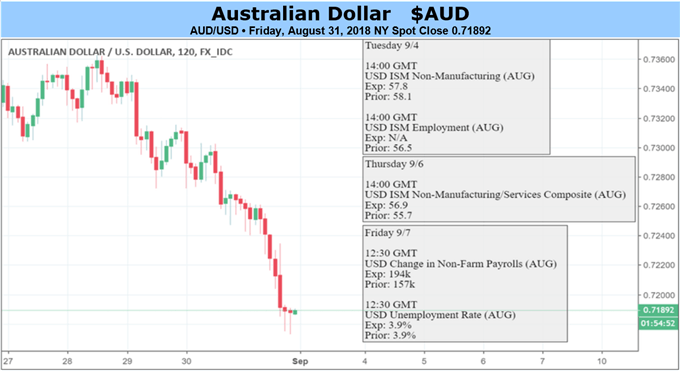 The Australian Dollar faces a week of heavyweight economic news but none of it is very likely to improve the currency’s flagging fortunes.

Investors can look forward to an interest rate decision from the Reserve Bank of Australia on Tuesday. However there are no prizes at all for guessing that the record low, 1.50% Official Cash Rate is universally expected to stay put for yet another month. Indeed, local futures markets do not price in any sort of rise before early 2020 and, given the maturity of the global economic cycle, it may require a bit of imagination to be certain that economic conditions are going to warrant tighter policy by then.

Still, it will be interesting as always to hear what RBA Governor Philip Lowe has to say after the decision. The RBA worried aloud last week that Australia’s high consumer debt might limit its policy response in the future, a comment which knocked AUD/USD a bit on Friday. It is easy enough to see what the RBA means tough. Higher rates will mean still-greater debt-repayment burdens, reduced consumer spending and, very probably, a rise in defaults. Lower rates will stoke the borrowing orgy all the more. If Mr. Lowe alludes to this issue once again in the coming week it could spell more trouble for Aussie bulls.

Official Gross Domestic Product numbers are also due. The second quarter’s are coming up on Wednesday. 2018’s first three months saw a 1% rise on the quarter and a 3.1% annualized expansion. The market is likely to be content with anything that looks like ‘the same again’ but, given the increase in global trade friction of more recent months, the data could now be a bit historic for foreign exchange market play.

The upshot of all this is that the Australian Dollar remains strategically in the interest-rate doldrums and tactically prey to global risk appetite which moves entirely independently of events in Australia. The latter may end up supporting AUD/USD in the coming week, but it is very hard to predict. Given the lack of other likely support from what can be foreseen, it’s another bearish call.