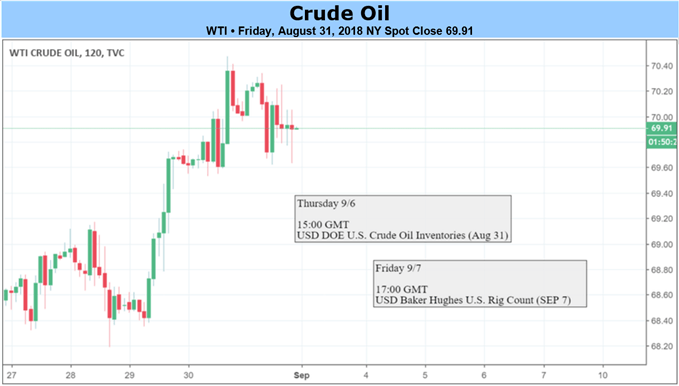 Greed and fear rule many markets, but lately, crude oil looks to be driven more by the latter. The specific fear that is surfacing is that of Iran’s supply of oil being shut off due to sanctions and a possibility of a blocked key water-passage, the Strait of Hormuz.

A vital sign of tightness in the physical oil market is calendar spreads in the futures market. When a front-month contract shows you a premium to a later-dated contract of the same commodity, there is typically a premium for supply now, and a potential fear that supply will be harder to come by down the line. This is known as backwardation.

The classic benchmark in crude is the December-December spread of the current year and the following. When looking to 2018, we’re off the highs from May when Brent traded at $80. However, since mid-August, the premium has doubled showing that a supply fear is being back, and the price of Brent has risen to $77/bbl as a result after trading as low as $70/bbl in mid-month when the spread was at the narrowest levels since November.

The Amount of Brent Backwardation Doubled In Two Weeks For Brent 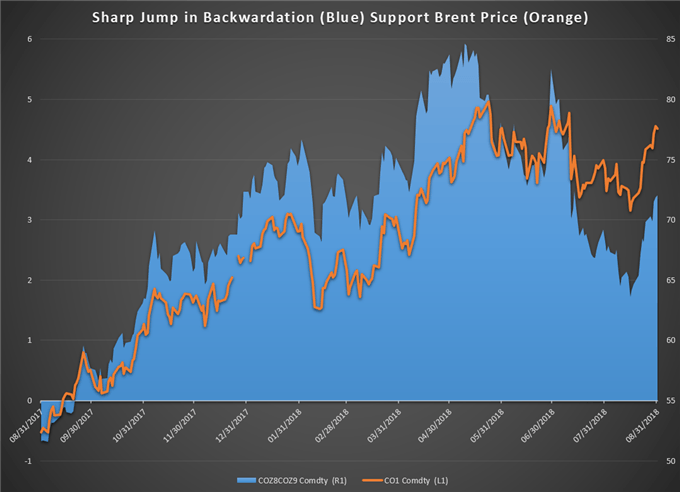 The chart above shows the premium demanded in blue for the December 2018 Brent contract over the December 2019 contract. Given the homogeneous properties of oil, a premium shows up when there is a perceived benefit to carry that exceeds the costs (insurance, storage, etc.) of carry, which would naturally help to support the front-month oil contract price in orange as we’ve seen.

The steepness of the rise, nearly 100% increase from $1.75 premium to $3.48 was attributed to the persistent supply fear from Iran being cut out of the market due to sanctions that don’t appear to be near resolution. Combining the jump in premium seems to show that a price spike in crude may yet be on the horizon as Dallas Federal Reserve President, Robert Kaplan warned at Jackson Hole last weekend.

Another key risk appears to be Emerging Markets as a key risk point, and at the same time, a key demand point for energy commodities. Whether traders look to Venezuela or Argentina, South Africa or Turkey, India or Indonesia, there appears to be a possible demand drop if contagion clicks in from one EM currency spreading across the world on an increasingly tightening Fed.

Brent crude bulls are likely breathing a sigh of relief after another higher-low was witnessed in the bull trend that has its roots in the summer of 2017. Brent has risen nearly 11% off the monthly low, and the technical pattern on the short-term seems to show that we’ve moved from a corrective pattern that lasted from May to April, and we’re now starting an impulsive move that could target the 2018 high of $80.49/bbl, and as high as $90/bbl in Q4, which aligns with the 2012 low and the 61.8% retracement of the 2012-2016 range.