Australian Dollar May Leave Its US Cousin To Make The Weather 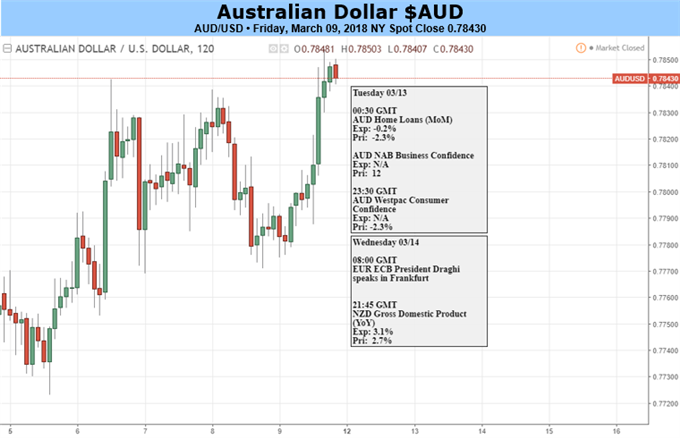 Is your trading strategy failing? Perhaps you’re making the Number One trading mistake. Find out here.

The Australian Dollar faces a week rather short of likely economic cues, with the March monetary policy meeting from the Reserve Bank of Australia now safely behind us.

Last week the RBA left the key Official Cash Rate alone at the now-venerable 1.50% record low which has endured since August 2016.What’s more it certainly didn’t sound like a central bank in any hurry to raise interest rates as it wrestles with stubbornly low inflation and high consumer debt. This of course puts in in marked contrast to the US Federal Reserve which is thought likely to raise its own cost of borrowing once more this month, and to do so again at least twice this year.

It also perhaps makes it harder for Australian economic data to really move the currency given that any change in the monetary outlook is clearly going to take a bit of time.

Still, interest rates alone don’t decide where the Australian Dollar goes and a revival in risk appetite following signs of nuclear rapprochement between the US and North Korea may prop it up.

The week is also not entirely devoid of Australian economic news either. Investors will get a look at a well-respected survey of business confidence from the National Australia Bank on Tuesday. That will be followed by another, on consumer confidence, from Westpac on Wednesday. The housing market is never far from Aussie-dollar investors’ minds and there’ll be a look at that too, in the form of official home-loan data.

However, while all of the above may provoke some immediate, binary trading reaction depending on how they go, the US Dollar is likely to keep running the AUD/USD table overall. And the Aussie remains stuck in a clear if gradual downtrend against its US rival, one which may have just seen another upside attempt fail at the highs of March 7.

Given the marked lack of obvious looming reasons why that downtrend should break –either fundamental or technical- it’s a bearish call this week for the Australian currency.

Whether you’re new to trading or an experienced operator DailyFX has plenty of resources on hand to help you be better. There’s our trading sentiment indicator which shows you live how IG clients are positioned right now. We also hold educational and analytical webinars and offer trading guides, with one specifically aimed at those new to foreign exchange markets. There’s also a Bitcoin guide. Be sure to make the most of them all. They were written by our seasoned trading experts and they’re all free.