Australian Dollar Likely Pulled One Way By US, Another By China 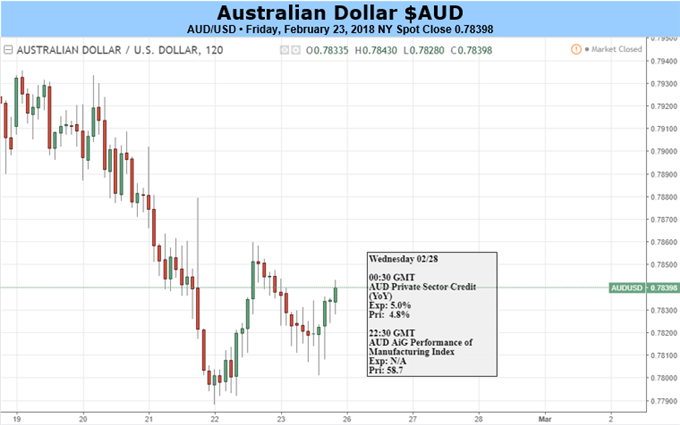 The Australian Dollar may not move much on its own account in a coming week which is not replete with domestic economic data. However, there will be plentiful news on tap from the two economies whose fortunes will probably have a greater impact on the currency’s path this year anyway; the US and China.

For the moment the US Dollar seems unable to fully capitalize on its home economy’s economic strength and the Federal Reserve’s unchallenged position as the most aggressively hawkish central bank in the developed world. The precise reasons for the US Dollar’s weakness are not entirely clear. Worries about wide-ranging tax cuts – at a time when the world’s largest economy is running twin deficits – may explain some of it. The plain fact that the Fed no longer stands alone in withdrawing post-crisis stimulus may account for some more. But while both seem plausible neither seems entirely sufficient.

However, the Australian Dollar is still meandering lower against its US cousin in any case. Markets remain quite convinced that when Australia’s record-low 1.50% Official Cash Rate moves again it will be heading North. But weak inflation, feeble wage settlements and seriously indebted consumers mean that such a rise is not expected until the end of this year at the earliest, and possibly well into next. However, as long as global growth holds up, the Australian Dollar is unlikely to be truly friendless, especially if the Chinese economy keeps firing, promising solid demand for Aussie raw materials.

There’ll be plenty so see from China in the coming week, with official and private Purchasing Managers Indexes due from across the economy. If they hold up as expected, then the Australian Dollar ought to get a boost. Be warned though that the long Chinese Lunar New Year break may weigh on these figures. If so, that could see some knee-jerk Aussie selling even if it isn’t sustained. Watch the manufacturing PMIs particularly (they come out on Wednesday and Friday). Growth here has been OK, but hardly stellar. Slips from here could be costly for the Aussie.

From the US will come a plethora of numbers, to include trade, Gross Domestic Product and personal spending. Newly-minted Fed Chair Jerome Powell will also testify to the House Financial Services Committee.

All in all, the week is likely to tug the Australian Dollar both ways. As-expected US data and a hawkish tinge to Mr. Powell’s talk could see the greenback resurgent, whereas strong Chinese numbers are likely to invigorate Aussie bulls. With both in mind it’s a neutral call this week, but watch the data with particular care.