Official fourth-quarter numbers showed the Consumer Price Index up by 0.6% for the final three months of 2017- an annualized gain of 1.9%. Expectations beforehand were for increases of 0.7% and 2%, respectively. The ‘trimmed mean’ core inflation figure came in at 1.8% on-year, in line with expectations. It is this which the Reserve Bank of Australia is meant to target in a 2-3% band.

All up these data mean that the conundrum of a relatively strong economy has yet to translate into meaningfully higher inflation, but this is playing out in many developed markets at the moment. The Australian Dollar slipped quite markedly on the initial release, but clawed back some of those losses within minutes.

The Reserve Bank of Australia will make its next monetary policy decision on Tuesday next week. Rate-futures markets expected no change to the record-low 1.50% Official Cash Rate in any case and the latest inflation numbers will do nothing to alter this prognosis. They do expect that the next move will be an increase, however, but don’t price on in until the end of this year.

Markets will be keen to hear the RBA’s views though as the central bank has made very little official comment so far this year. Its take on current Australian Dollar levels will be especially sought after given its vocal opposition to what it saw as a too-strong local currency at many points in 2017.

The Australian Dollar has been on a tear against a generally weaker US currency since early December last year. The Aussie’s gains have been particularly impressive as the uptrend channel on the daily chart below shows. They took AUD/USD up to highs not seen since the start of 2015. 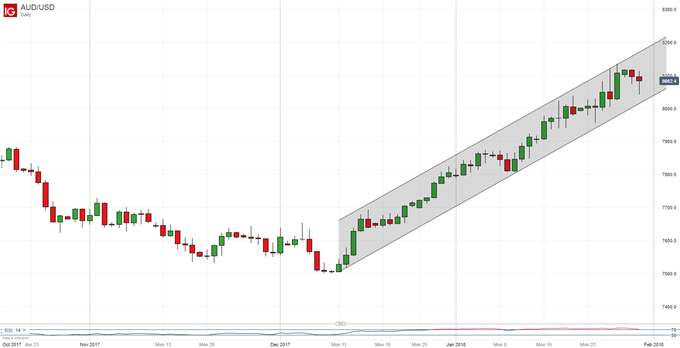 However, the breakneck pace of these gains has left the pair looking considerably overbought and some pause for reflection is surely in order. Financial markets seem to be in the midst of a reassessment of the US Dollar weakness theme which has dominated trade in January.

While the Federal Reserve no longer stands alone as a central bank with monetary tightening on its mind, it is clearly the furthest down that path and, on current reckoning, likely to head further down it than any other this year and possibly well into next. Of course markets could simply be waiting to hear from the Fed, which will make its policy call later Wednesday.

In any case the current AUD/USD channel will still be respected provided that the pair remains above the 0.8010 level which forms its lower bound. The first Fibonacci retracement of the climb from December 10’s lows to the high of January 26 comes in below that at 7986.9. These could be levels to watch if the Aussie starts to consolidate.