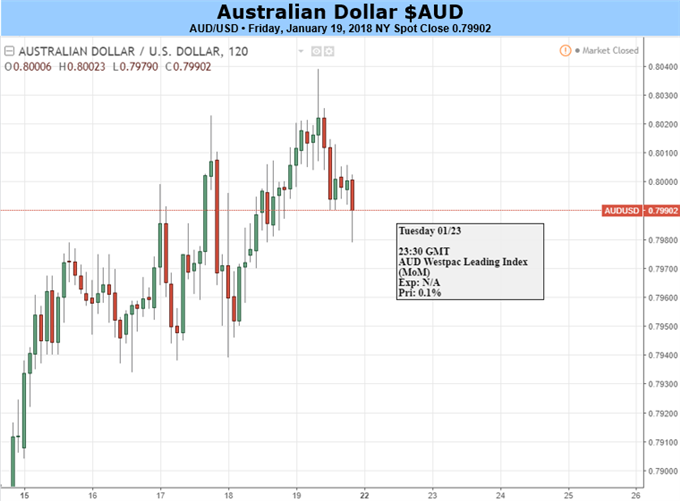 Australian Dollar Could Use A Breather- It Might Just Get One

The Australian Dollar is riding pretty high as a new week gets under way.

At face value there are plenty of good reasons why it should be. The market may have been unsure as to what to make of last week’s mixed bag official employment data. Who could blame it? Growth was strong but part-time roles predominated. The participation rate rose but so did the overall unemployment rate.

Still, the Australian economy seems to be quite the labour machine. The three-month rolling average for job creation is now 35,500 per month. That could be as much as twice the country’s rate of population growth. If this keeps up, then the weak wage settlements which have bedevilled the overall inflation picture must surely be history.

Moving on, China can never be far from any assessment of Australia’s performance. Here, too the signs look good. Official growth numbers from Asia’s largest economy came in last week and topped forecasts for 2017 as a whole. China’s economy expanded by 6.9% in 2017, comfortably meeting Beijing’s target for growth of “6.5% of better” and banishing at least to some extent the bitter memory of 2016’s 26-year low of 6.7%.

Mix in a generally more cautious view on the US Dollar and its Australian cousin looks well placed to benefit. So it has. AUD/USD crossed the psychologically important 0.80-point last week to reach highs not seen for four months.

So far so good, at least for the Aussie bulls. They’ve been firmly in charge of AUD/USD since December. But the coming week is a bit light on heavyweight scheduled economic numbers from Australia, China or the US –with the obvious exception of official US growth numbers which will see daylight on Friday.

AUD/USD is also looking a little overbought. Moreover, although the Reserve Bank of Australia has yet to weigh in with any commentary about the more unwelcome effects of its strength, the pair is now firmly in the area where such warnings have come before. They might come again.

Even if they don’t, the Aussie looks like a currency in need of a rest if not necessarily a climb-down. Given the relative paucity of data and the strong gains already seen, this could be the week when it finally gets one.

It’s a neutral call for it over the coming five sessions, with a warning caveat that the clouds over the US Dollar might just lift a little. That could make life less comfortable for Aussie bulls than it’s been for a while.