Australian Dollar: Big Week Looms, But Will it Really Matter? 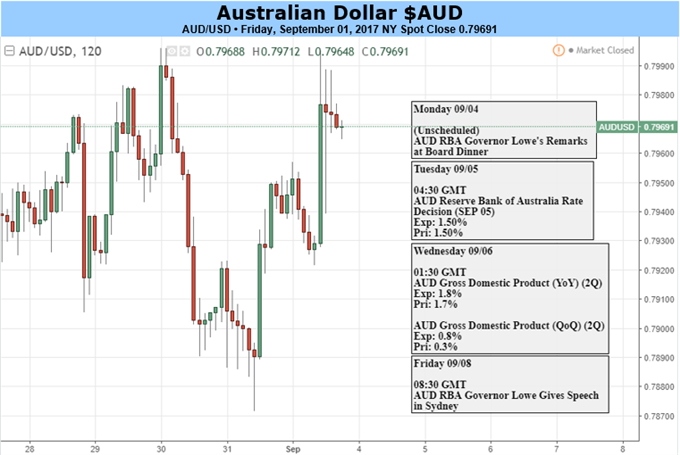 Just getting started in the AUD/USD trading world? Our beginners’ guide is here to help.

This week offers the Australian Dollar market some heavyweight economic news. But whether it will have the punch to shake the currency (and AUD/USD especially) out of its long torpor must be debateable.

First up will be the Reserve Bank of Australia’s September monetary policy decision. That looms on Tuesday. Don’t expect fireworks. There is held to be no chance whatsoever that the record-low, 1.5% Official Cash Rate will change after the meeting. Markets still think that the next move will be a rise but such a thing is not fully priced by futures markets until the back-end of 2018.

That means the main feature of next week’s policy call will be any comment the RBA cares to make. We can probably bet that the prognosis will be one of steady growth. But if the central bank frets again about Aussie Dollar strength and the country’s legions of heavily indebted consumers – and it’s a fair bet that it will – then it’s quite hard to see where any currency lift is going to come from on Tuesday.

Which brings us to Wednesday, on which the first official look at Aussie Gross Domestic Product growth in the May-June quarter will top the bill. The prognosis is not great. Australian Treasurer Scott Morrison said last week that, while there have been early indications that the economy continued to perform quite well, these need to be balanced against other factors, including the impact of Cyclone Debbie, which could hit growth. That sounds like a man talking down expectations to me,

In any event the economists at Morgan Stanley have already done their balancing. They think annualized growth could be as low as 1%. That would take growth rates down to lows not seen since the early 1990s and mean a big slip from the first-quarter’s 1.7% rate.

However, perhaps the risk here is that markets are getting too gloomy and that growth will manage to top the most pessimistic estimated. Construction numbers for the quarter released last week smashed all estimates, after all, and they will feed quite healthily into the overall GDP picture. A beat could give the currency a lift, if only for a while.

Aside from these two news points, investors can also look forward to news of the Australian current account position, job advertisements and service-sector performance, all of which have the potential to move the market. But the overall backdrop for the currency is one of at least relative investor support – even at record lows Aussie yields are attractive – countered by rising RBA watchfulness of the currency level. None of this is likely to change this week so, while AUD/USD may be in for a more volatile ride, the basic backdrop seems set to endure. That’s why I am making a neutral call yet again. 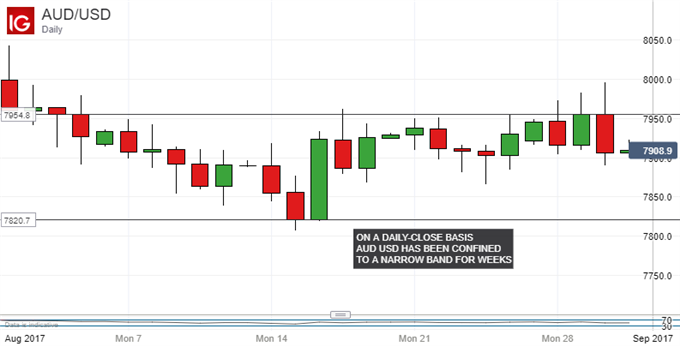