The Australian Dollar gained Tuesday as construction data surged well ahead of estimates.

An official look at “construction work done” for the second quarter showed a gain of 9.3% compared to the first, hugely ahead of the 1% gain expected.

These figures feed into the official Gross Domestic Product release due next week and suggest that the construction sector will more than pull its weight in the Australian growth profile.

However, things may not have been as good in more recent months. Numbers released at the same time showed that overall building approvals fell 1.7% in July, but this was much less than the 5% fall which markets expected. The on-year slide was 13.9%, again better than forecasts which centred on a 16.6% fall.

AUD/USD rose after the data, with investors seeming to focus on those positive quarterly numbers. 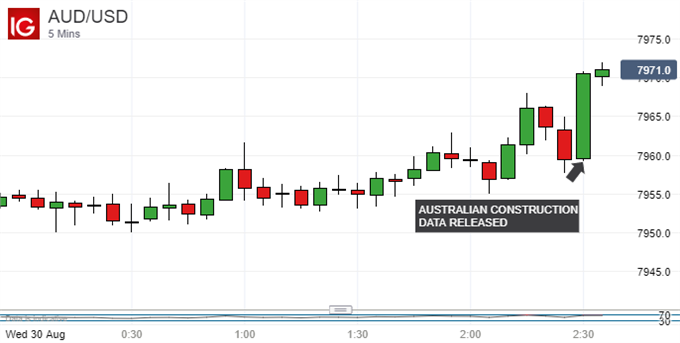 Some caution may be warranted when it comes to the sustainability of those figures. The Australian Bureau of Statistics said that much of construction’s second-quarter pep was due to work connected with the construction of a large new Liquified Natural Gas handling facility. This is of course a one-off which won’t be seen in later releases.

More broadly the Australian Dollar has been trading a mystifyingly narrow range against the US on its daily chart for weeks now. Admittedly it has not fallen very far from its high for 2017, which is also a more than 2-year peak. However, a rash of commentary from the Reserve Bank of Australia fretting what it fears would be the baleful effects of further currency strength seem to have kept the bulls in check. That’s even though there’s clearly an underlying appetite to buy the currency.

There has been little recent rhetoric of any sort from the central bank however, which seems to have emboldened investors to try the top of the range. 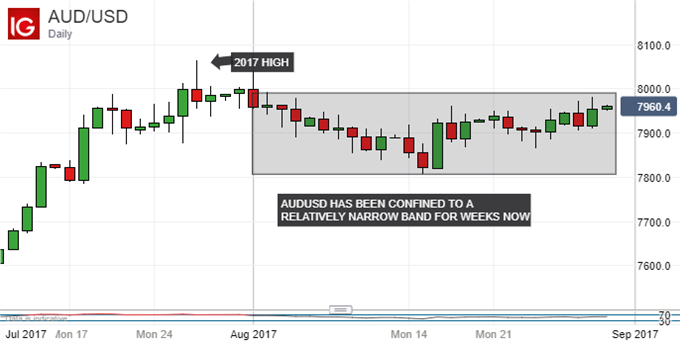 However, it’s probably worth noting that the next Australian monetary policy decision is coming up early next week, on Tuesday. Official comment is usual sparse in the runup to policy calls and we can probably expect the RBA to reiterate its currency worries once the decision is out of the way. No change to the current, record-low 1.50% Official Cash Rate is expected.