Australian Dollar on Watch for RBA Interventions After Debelle 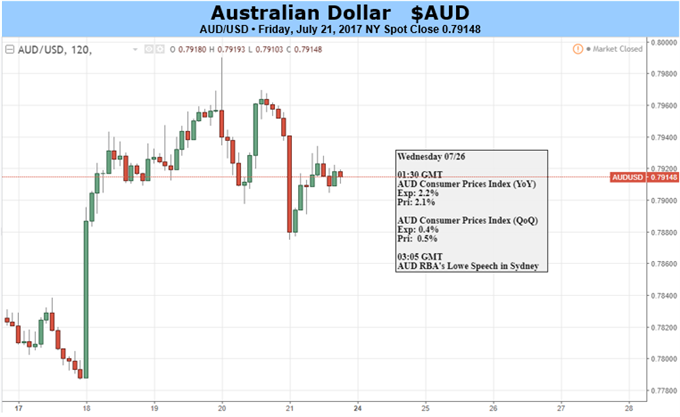 Join up and join in. Get free, interactive coverage of all major Australian Dollar moving economic data at the DailyFX webinars

Reserve Bank of Australia Deputy Governor Guy Debelle gave AUD/USD serious pause on Friday. He spoke in Adelaide and poured cold water on the idea that recent RBA discussions of Australia’s neutral interest rate presaged any prospect of a hike in the country’s record-low, 1.5% Official Cash Rate. He also said that local rates will not have to rise in step with those of other developed economies.

The latest set of RBA policy meeting minutes was released last week, before Debelle spoke. It saw markets wondering whether the OCR might just be going up a little sooner than they thought. Talk of a 3.5% neutral rate seemed to some to imply that so loose an OCR could not last much longer. However, the RBA seems very keen to disabuse them.

Now, despite this the Australian Dollar remains in something of a bullish sweet spot, especially against its big US brother, and that certainly shows in recent price action. AUD/USD reached two-year highs last week and almost broke above the 80 US cent barrier in the process. Reasons for this are clear enough and threefold.

Firstly of course the greenback has been under pressure against just about anything as markets wonder how much higher US interest rates are going to go. In second place comes a run of rather better Australian economic data. Thursday’s employment report was a real crowd-pleaser, showing, among other good things, a notable surge in full-time jobs. Lastly there’s China, where official growth figures came in ahead of expectations, raising Australian hopes that raw material demand from that quarter will be solid.

Even if the RBA is worried about the effects of a too-strong Aussie on the economy in its charge, it can’t very well fight against all of the above even if it wanted to (and it probably doesn’t).

But, with Debelle’s speech in mind, investors will be very keen to hear from RBA Governor Philip Lowe. He will speak in Sydney on Wednesday. If he worries anew about the Aussie’s strength, and perhaps reinforces Debelle’s view that talk of neutral interest rates means very little, then AUD/USD could struggle for further gains.

There’s the little matter of a Federal Reserve monetary decision to contend with too of course, and the release of official Australian Consumer Price Index data for the second quarter. However, assuming these all go with expectations then the potential for surprise interventions from the RBA will probably now dominate trade for a while.

This needn’t dent the Aussie much, but it may make further gains harder to justify. For those reasons, this week’s call is neutral. 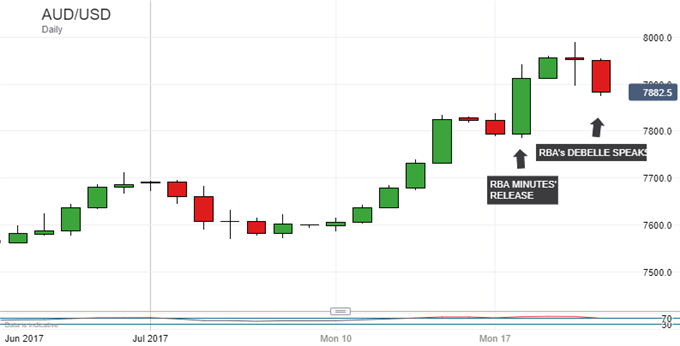