What’s going to move the Australian Dollar through 2017’s third quarter? The DailyFX forecasts are here

The Australian Dollar took a knock Friday as Reserve Bank of Australia Deputy Governor Guy Debelle appeared to push back against markets’ heightened expectations that local interest rates could rise.

Speaking in Adelaide, Debelle said Australian rates do not have to go up in line with those of the RBA’s global central-banking peers. He also said that recent RBA ruminations of the “neutral” monetary policy rate for Australia were “not significant.”

Debelle’s comments come as AUD/USD is loitering near two-year highs. Some of that strength has been down to the most recent set of monetary policy meeting minutes. Evident talk there of a 3.5% neutral interest rate had some investors wondering whether the record-low, 1.50% Official Cash Rate might be going up sooner than markets expect – currently toward the end of next year.

However, Debelle seems to have clamped down hard on this expectation, with predictable consequences for AUD/USD. The pair retreated further from the psychologically important 80-US-cent handle as he spoke. The RBA is well known to fret about the effects of a strong currency on inflation and the Australian economy’s transition away from long reliance on raw-material exports. Debelle clearly feels that markets got carried away this week in their expectations of interest-rate support.

However, it seems unlikely that the RBA will be able to completely dampen investor enthusiasm for the currency as long as the US Dollar remains under broad pressure. Australian economic data have improved markedly of late, with this week’s solid employment numbers the latest example. Stronger Chinese growth data have increased investors’ appetite for Australian mining stocks while less onerous than expected capital requirements have boosted its banks. 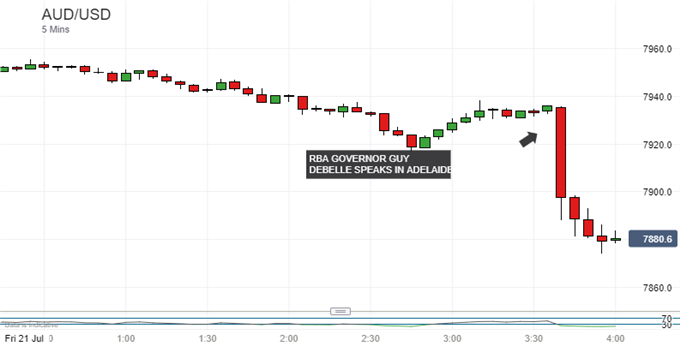