Australian Dollar: More Gains May Be Too Much to Ask 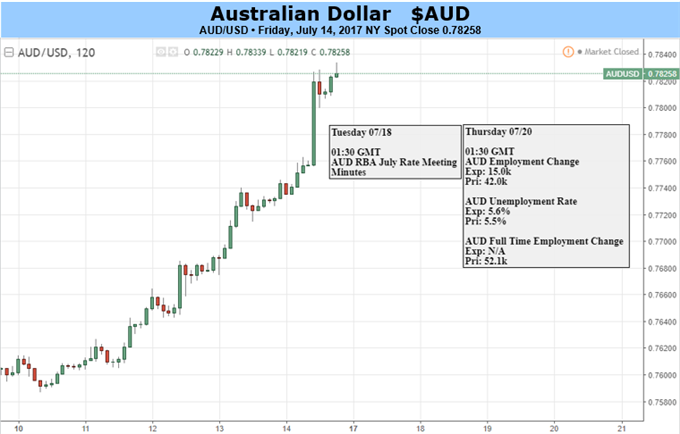 Join us and join in with live, interactive coverage of all major Asia/Pacific economic data at the DailyFX webinars

Whether Ms. Yellen was really being especially less-hawkish or more-dovish on monetary policy when she said that the Fed was prepared to continue, or intensify, stimulus measures if inflation were seen to wilt is at this point moot. Markets clearly thought that she was and acted accordingly.

The Australian Dollar was arguably a special beneficiary of this. With Australian rates at record lows and likely to remain so well into next year, it makes sense that any roll back of prospects for tighter Fed policy should support it.

However, perhaps the Fed isn’t the only thing helping AUD/USD, even if it seems to be the main prop of the moment. Base metal prices have done well recently, in part thanks to news that China’s demand for iron ore has risen. The price of this key Australian export is at ten-week highs, even though it remains well down for 2017 as a whole.

Wherever it comes from, there’s a tailwind behind the Aussie as it moves into a new week.

The first big risk event will come Monday with the release of China’s Gross Domestic Product numbers for the second quarter. The markets are looking for a chunky 6.8% annualized gain and it will be interesting indeed to see how the actual result affects the Aussie. The initial reaction will probably mirror the strength or weakness of the number, but the extent to which this price action holds will show us the way in which China is driving the currency now.

Investors will also have sight of the Reserve Bank of Australia’s last set of policy-meeting minutes. That July 4 meeting saw the RBA leave rates at record lows and decline to join the more hawkish chorus sung by many developed market central banks. Thursday’s official unemployment from Australia will also draw the crowds. The labor and housing markets appear to be the RBA’s main monetary policy watchpoints.

If all the economics line up as expected, it’s hard to see a meaningful fall for the Australian Dollar this week. That said, a fair amount of good news could now be in the price and so a neutral call is probably warranted. 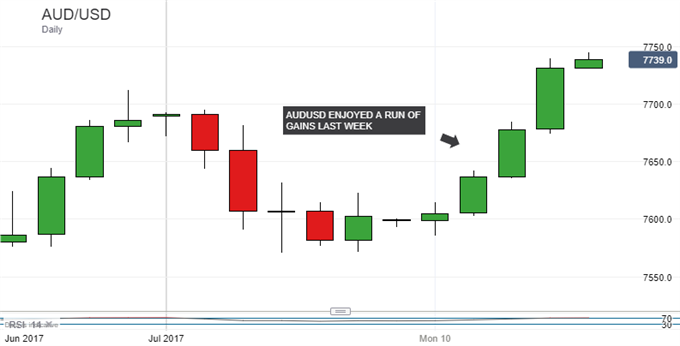