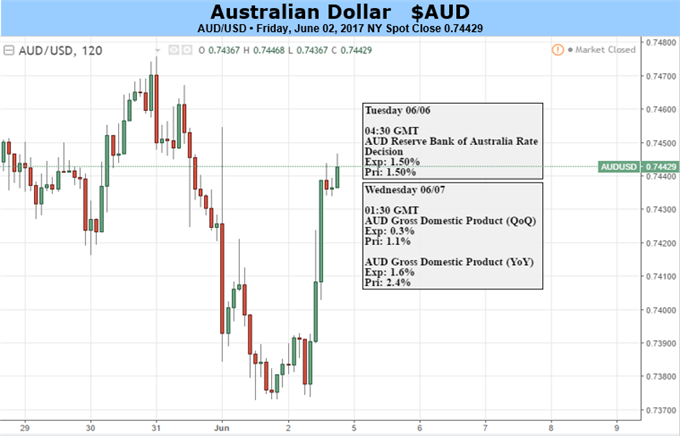 A versatile actor on the currency stage, the Australian Dollar plays many different roles. The trick this week will be to know which one it will play and when.

At its straightest, AUD/USD is an indicator of interest-rate differentials between Australia and the US. But day-to-day its movements can also be a function of pure Australian economic performance. Then, to add spice, the Aussie often finds itself moving as the markets’ top, liquid proxy for China.

The coming week offers what should be two banner domestic events for the currency. On Tuesday, the Reserve Bank of Australia will announce its monetary policy decision for June. Then on Wednesday investors get a look at Gross Domestic Product data for this year’s first quarter.

However, there may be less here for markets than you might think. The RBA is all-but certain to keep rates at their 1.50% record low this month. It has widely flagged its belief that an uncertain global environment still warrants this monetary accommodation. Markets have taken the hint. Rate futures may not see any reduction in interest rates for the next twelve months, but they see no rise either. Assuming this picture survives the interest rate decision, it’s hard to see AUD/USD moving far on it.

And GDP, well, obviously a perky figure has scope to lift the currency. The last set of figures was quite encouraging, with a 1.1% on-quarter rise evident as 2016 bowed out. If they are strong again, AUD/USD may firm up. But these are first-quarter figures. We are now quite close to the start of the third.

Even if early-year growth was great, it may be just a little historic now for many investors. Moreover, one role AUD is certainly playing at present is that third one – China proxy. At least, AUD/USD is clearly vulnerable to disappointments from the world’s number two economy. Last week a shock contraction for private-sector manufacturing hit the Aussie Dollar hard. Before that, on May 24, Moody’s unexpected hack at China’s credit rating saw the currency’s previous rise stall.

It’s hard to avoid the conclusion that local data will have less impact on the Aussie than any lackluster Chinese numbers which may come along. With that in mind watch out for China’s May trade and export data on Wednesday and its consumer price index release on Friday.

If these show any weakness then AUD/USD will probably be more tragedy than comedy. It’s a bearish call this week.