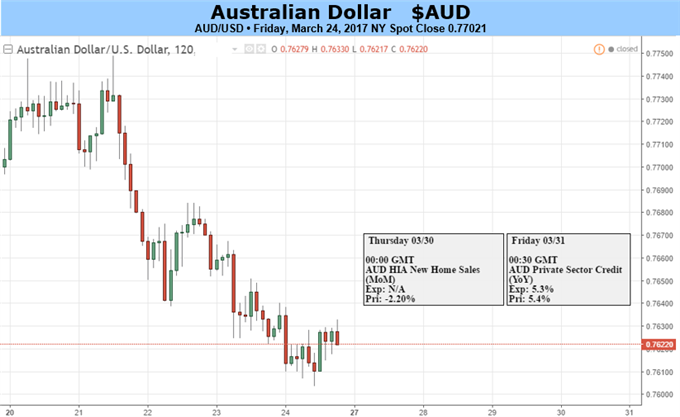 Julius Caesar was well advised to be wary of the Ides of March – he was murdered on it after all – but this year that day, March 15, was when Australian Dollar bulls avoided the knife.

For it was then that the US Federal Reserve delivered what’s now famous as its “dovish interest-rate hike.”

It raised rates, as expected. It stuck to its forecast of three more rises this year, as expected. And the US Dollar duly sank like a stone, against almost everything.

Apparently, the markets wanted a hint that even more monetary tightening could be at hand. Whether they were ever going to get this is a moot point; they wanted it and didn’t. So, the US Dollar fell.

This was particularly handy for the Australian Dollar. At the time, it was moving ever-further from February’s peaks. The swooning greenback sent it right back up there and then some.

Saved by the Fed? AUD/USD 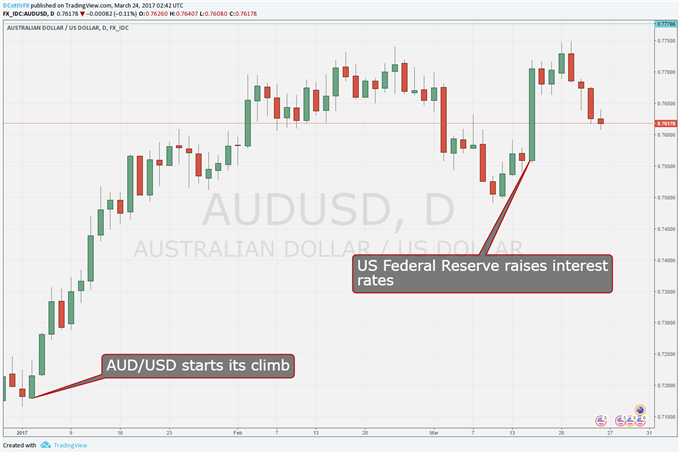 The problem for the Aussie now is that this dovish Fed rate hike hasn’t provided it with lasting support. Indeed, it started to inch back down again within two days. Yes, AUD/USD is still well above the low of 0.74889 seen before the Fed sent the greenback soaring. But it’s also well below the 0.7749 peak it made right after that.

The Aussie must contend with a tightening Fed, and a domestic central bank which worries aloud and often that a strong currency would “complicate” Australia’s crucial transition away from reliance on the mining sector. The RBA can’t explicitly say that it doesn’t want a stronger currency, but it implies just that every chance it gets.

This week is very unlikely to change that picture. Almost all the major economic data will come from the US, including a second look at fourth-quarter Gross Domestic Product growth. Australia’s data highlight is likely to be Tuesday’s new home sales numbers. The RBA is increasingly worried about house price froth, but seems unwilling to use monetary policy to combat it at a time when inflation is low.

You can see its point. Its mandate targets consumer prices, not house prices.

In fundamental forecast terms then, it’s hard to see this week as anything but ‘steady as she goes’ for AUD/USD. And that means the pair probably heads lower, if not catastrophically so.

This thesis might just be threatened by Chinese manufacturing data which comes out on Friday in the form of the March Purchasing Managers Index for the sector. Given the Aussie Dollar’s sometime role as the market’s favorite liquid China proxy, strength in this index could see the currency end next week with a flourish.

Would you like live coverage of major market-moving events, or just to know more about financial market trading? In either case, the DailyFX webinars are for you.