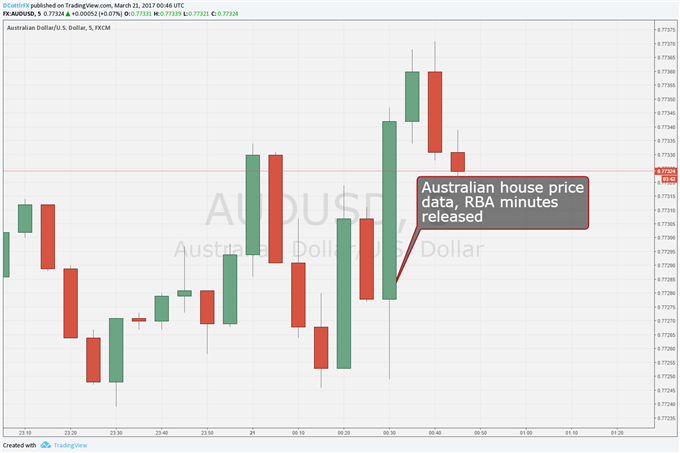 The Australian Dollar got a short-lived boost on Tuesday as an official survey of house prices blew expectations away.

This was by far the strongest on-quarter gain since the third quarter of 2015, but robust prices are not a new story. Indeed, house-price strength has seen affordability concerns take center stage in domestic politics. Any number of potential solutions for low-income buyers have been floated.

However Australian Dollar bulls seemed to like the data, which do at least point to underlying confidence in the local economy. AUD/USD rose to 0.77370 in the immediate aftermath, from 0.77249 just beforehand.

That said the Aussie didn’t hold up there for long. That’s possibly because the minutes of the Reserve Bank of Australia’s last monetary policy get-together reminded investors that the RBA was keeping a close eye on the housing market, where it detects a “build-up of risks.”

The RBA noted that home investment borrowing had picked up, and that debt was rising faster than household income.

That aside the minutes added very little to the statement made on March 7, when the RBA left the key Official Cash Rate on hold at the record low of 1.5%, as universally expected. However, they did contain the now well-worn warning that, in the RBA’s view, a rising Australian Dollar would “complicate” the country’s transition away from the mining boom of recent years.

The RBA also took a measured warning shot at the Trump White House, noting that any increase in US protectionism would be harmful for the global economy.

It may be your favorite currency, but who else shares your optimism? The DailyFX sentiment page will give you a clue.