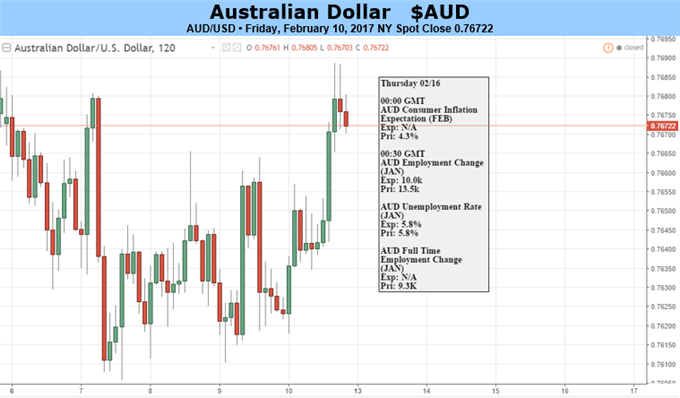 It was full of potential market movers. We’ve had an interest rate decision from the Reserve Bank of Australia, and its quarterly Statement on Monetary Policy. Then came news that China’s trade surged in January with both exports and imports exploding beyond anything that the forecasters expected.

The last bit of news certainly lifted the Aussie but, as you can see from the chart below, the week’s range was rather narrow nonetheless. 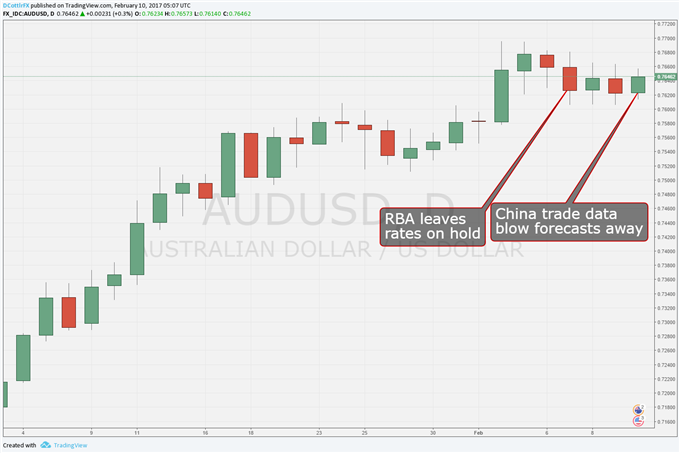 And the ostensibly Aussie-supportive news didn’t end there. Asian stocks hit 18-month highs, thanks to strong performances from China, Hong Kong and Taiwan. This in turn was reportedly on hopes that China’s economy is now not merely stabilizing but strengthening, a point those trade data seem to have underlined in spades.

RBA Governor Phillip Lowe even said on February 9 that it was “hard to argue” that the Aussie was undervalued, given the central bank’s growth prognosis.

So why isn’t the currency higher? Well, at least against the US Dollar, it’s plausible to argue that nothing which happened last week has fundamentally changed the relative interest-rate outlook for the two countries. Right now, markets believe that Australian rates won’t rise for some time – even if they go no lower – while US rates are going up this year, possibly sharply. The Federal Reserve has yet to adjust the central case it put in December which envisaged three quarter-percentage-point increases this year.

So, as we move into a new week, we have to ask whether anything will change that rate outlook? And the answer is “probably not” once again. We might be able to look forward to some Aussie-supporting trans-Pacific bonhomie if Japanese Premier Shinzo Abe’s diplomacy-and-golf weekend with US President Donald Trump results in some trade-friendly communique.

Closer to Aussie home we’ll also get a look at official unemployment figures. However, the RBA wondered last week whether the economy could expand fast enough to meaningfully reduce joblessness from current levels in the short term. That might take the edge off even a strong number.

But the big problem for the Aussie comes in the shape of one Janet Yellen. The Fed Chair will give her semiannual testimony to members of the House of Representatives on Wednesday. If markets come away from that still convinced that those three hikes are coming – and it’s odds on that they will – then it may once again be hard for the Aussie to gain.

Be in no doubt. Australian Dollar bulls probably have much to look forward to in terms of better regional growth and a rosier future for global trade than the early days of the Trump presidency might have suggested.

But next week may be all about interest rates, and the “USD” side of AUD/USD. That could make progress tough.

What does the broad market make of your favorite currency? The DailyFX sentiment page can answer that question.