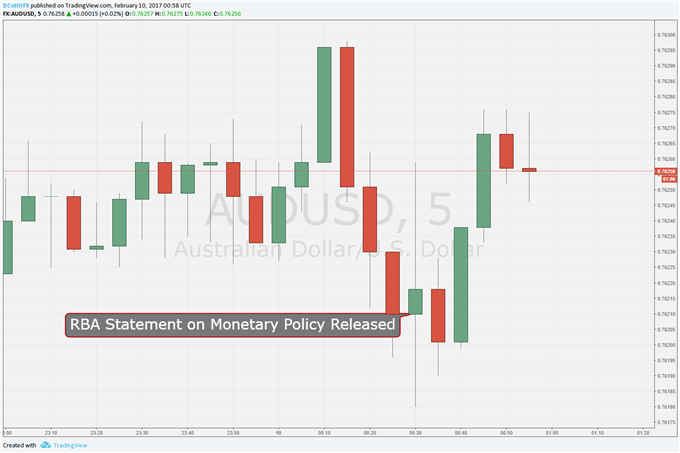 The Australian Dollar was steady on Friday as the Reserve Bank of Australia trimmed its near-term growth forecasts, but remained upbeat about the further future

The central bank’s Statement on Monetary Policy (SoMP) is released four times every year and contains an assessment of current economic conditions, along with the outlook for inflation and growth.

The RBA said that growth seemed to have rebounded in the final quarter of 2016 and that the third quarter’s once-ominous weakness now looks to have been a blip. It also feels that the growth outlook has improved for Australia’s major trading partners but that recent high commodity prices were unlikely to be sustained. The central bank also doubted that economic growth would be enough to pull the Australian jobless rate down by much.

All up then, there was little here to dent the prevailing thesis that, while Australian interest rates might not be cut any further from the current 1.75% record low, they probably won’t be going up anytime soon either. This scenario was already underpinned by comments which followed the RBA’s decision to leave those rates alone earlier this week.

AUD/USD got up to 0.76261 after the release from 0.76210 beforehand. However, it had slid just before the report saw daylight and remains confined to its weekly range.

Up, but not by much: AUD/USD

Other Australian data released at the same time showed that home loans rose by 0.4% on the month in December while investment lending fell 1%. These were both weaker than expected but – in the case of investment lending, at least – may simply be a retreat from previously high levels.

What might the year’s first quarter hold? DailyFX analysts have their cards on the table. Check out their forecasts here.