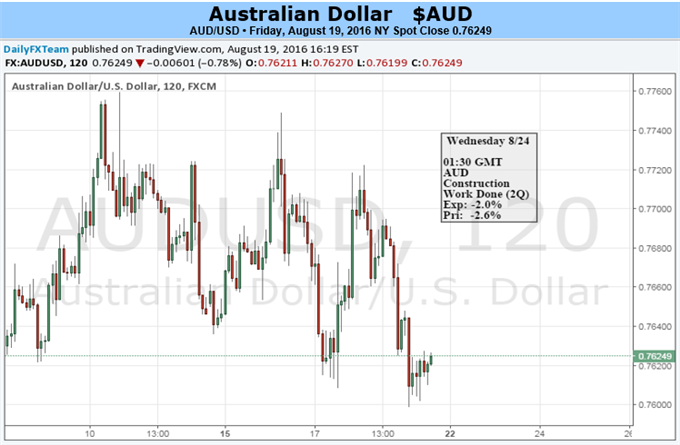 What do past AUD/USD price patterns say about where it will go next? Find out here.

The Australian Dollar turned lower despite supportive economic news flow on the domestic front. The currency spent most of last week in congestion mode, oscillating in a narrow range against its US counterpart despite better than expected headline readings on wage inflation and employment. Minutes from Augusts’ RBA policy meeting also passed with little fanfare, repeating the argument that supervisory measures cooling the housing market allow room for easing but offering no clear guidance suggesting policymakers will use it.

An inability to rise on supportive news-flow seemed indicative of significant underlying weakness waiting for a trigger to be unleashed. The catalyst would emerge in the final hours of the trading week as Fed rate hike expectations began to swell, undermining support for yield-sensitive assets including high-beta currencies. The shift followed a conspicuous about-face in rhetoric from San Francisco Fed President John Williams, whose pronouncements are closely monitored because the markets see him as a close confidant of Chair Janet Yellen.

Williams published a pointedly dovish essay early in the week, only to be swiftly countervailed by strong hawkish comments from New York Fed President Bill Dudley just hours later. Minutes from July’s Fed policy meeting seemed to amplify the sense of discord among policymakers, with markets ultimately concluding that a divided FOMC will probably translate into longer standstill and punishing the US Dollar. The landscape suddenly changed on Thursday as Williams painstakingly repositioned himself, speaking almost as though he had been chastised to get back in line. He said he would prefer to hike rates “sooner rather than later” and even echoed Dudley’s concerns about the under-pricing of rate hike probability.

A mostly quiet economic data docket in the week ahead will keep the spotlight on this narrative as all eyes turn to a speech from Fed Chair Yellen at the annual Jackson Hole symposium. The gathering has emerged as a venue for key announcements of Fed policy intentions in recent years. If Williams’ retreat last week is representative of Fed leadership’s efforts to corral disparate FOMC members and present a unified hawkish posture, this will be the opportunity for Yellen to drive that message home. The Australian Dollar is likely to find itself on the defensive if this proves to be the case, suffering at the hands of an adverse shift in yield spreads as well as the likely onset of risk aversion.