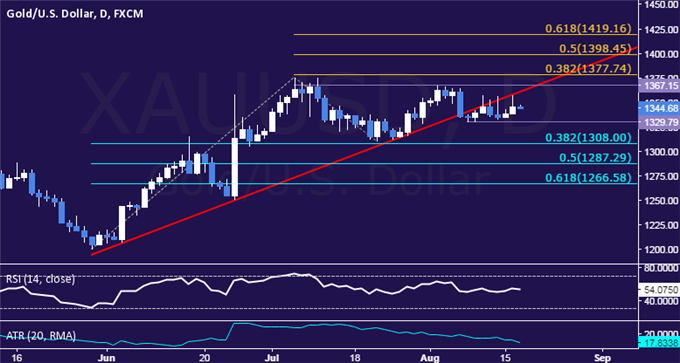 Gold prices remained locked in a familiar range after another attempt to build upside momentum fizzled intraday. The metal rose against a backdrop of broad-based US Dollar weakness. The move faltered despite disappointing US CPI data on the back of hawkish comments from New York Fed President Bill Dudley, who said the market is “complacent” about the need to hike rates and “under-pricing” the scope of on-coming tightening.

Looking ahead, minutes from July’s Fed policy meeting are in focus. The central bank asserted that “near-term risks to the economic outlook have diminished” following the sit-down. Traders will be keen to see more about what lurks behind this assessment to gauge whether priced-in rate hike probabilities are indeed too low, as Mr Dudley argued. Needles to say, a hawkish tone is likely to boost the US Dollar and send gold prices lower.

Crude oil prices continued to push higher amid swirling hopes for a possible supply-side deal to boost prices at meeting of OPEC and non-OPEC producers in Algiers next month. Reports asserting that representatives from Iran will attend the sit-down and reports of a formal meeting between Russia and OPEC members in October – ostensibly to follow up on any progress previously – all fed the rumor mill. A report from API suggesting inventories fell by 1.01 million barrels last week probably helped as well. Official EIA weekly inventories data is on tap ahead, with an increase of 410k barrels expected.

What does retail traders’ gold positioning say about the price trend? Find out here! 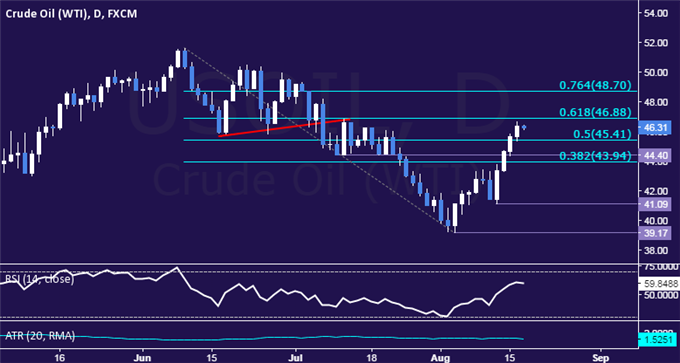