The sentiment-linked New Zealand Dollar aimed cautiously higher this past week, but it was unable to keep up with the more aggressive pace set by equities. On Wall Street, the Dow Jones, S&P 500 and Nasdaq Composite climbed about 1.4%, 2.2% and 2.64% respectively. Could there be another fundamental force withholding upside potential in the Kiwi Dollar? It seems so.

Taking a look at the chart below, NZD weakness has been moving very closely with fading hawkish Reserve Bank of New Zealand (RBNZ) monetary policy expectations. As a result government bond yields, especially with longer-term maturities, have been underperforming. This is not just occurring in New Zealand, but a lot of attention has also been on weakening Treasury rates in the world’s largest economy.

Focusing on New Zealand, the government announced a slew of measures to tackle concerns about an overheating housing market recently. On top of this, the RBNZ has also been instructed to help with curtailing soaring dwelling costs. The former is likely aiding to cool hawkish policy expectations from a fiscal perspective, essentially placing less pressure on the central bank to do something.

With that in mind, all eyes turn to the RBNZ with the next monetary policy announcement on April 14th at 2:00 GMT. Benchmark lending rates are expected to be left unchanged at 0.25%, but the focus will likely be on other things. It will have a chance to offer guidance and commentary about the housing market and how it could approach taming it. The central bank has also been wary of rising bond yields.

As such, there could be room here for the central bank to calm markets further, pushing those yields lower. This will likely pressure the New Zealand Dollar lower. But, if global bond rates continue to aim cautiously lower, then it could further improve the environment for risk-taking and push equities higher, offsetting some weakness in the Kiwi. On balance, this points for a neutral fundamental outlook in the week ahead. 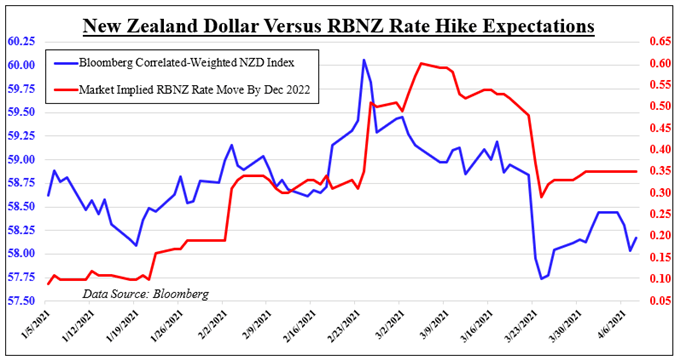