The haven-associated US Dollar and Japanese Yen lost ground early during Asia-Pacific trade before surging into the close of the Australian session, as market participants look ahead to the upcoming US non-farm payrolls report for August.

Equity markets plunged lower, following on from yesterday’s bloodbath as the Australian ASX 200 plunged 3% and S&P500 futures slid another 0.5%.

Looking ahead, Euro-area construction PMI could prove market-moving ahead of US and Canadian employment data for August. 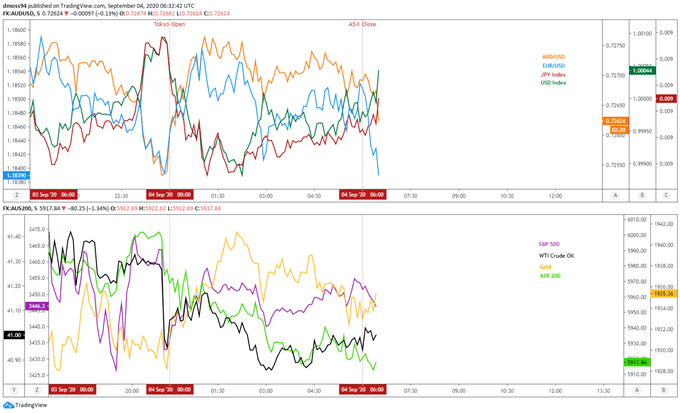 Upcoming Canadian and US jobs data for the month of August may weigh on the USD/CAD exchange rate and potentially halt the Greenback’s tentative 4-day recovery against the Loonie.

As noted in previous reports, the Federal Reserve’s ultra-accommodative stance in response to the coronavirus pandemic has been a driving force behind the significant decline seen in USD/CAD rates, with the adoption of average inflation targeting (AIT) potentially exacerbating USD selling in the coming months.

However, recent statements from several members of the Bank of Canada suggesting that monetary policy may be at its effective limit, could also intensify the USD/CAD exchange rate’s decline in the near term. 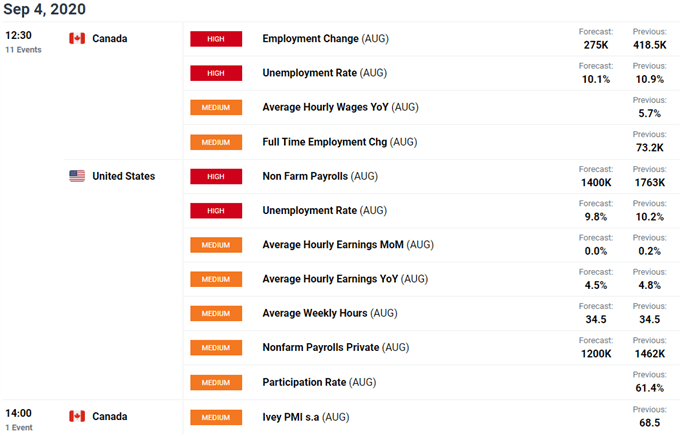 These quotes could indicate that Canadian policymakers are becoming more sensitive to the potential impact of alternative monetary policy measures and may look to roll back some of the BoC’s existing settings, if upcoming data shows the local economy is continuing to move in the right direction.

Moreover, the recent easing of lockdown measures in Canada has seen the University of Oxford’s Government Stringency Index dip below the highest level of restrictions currently enforced in the United States.

This progressive loosening of restrictions is likely to foster economic growth and could see the local economy outperform its southern neighbour in the short-term, given the number of Covid-19 cases in the US continue to surge. The 7-day moving average of daily cases hasn’t been below 40,000 since June 28.

To that end, USD/CAD rates may continue to slide lower as the return to normalcy buoys the risk-sensitive Canadian Dollar. 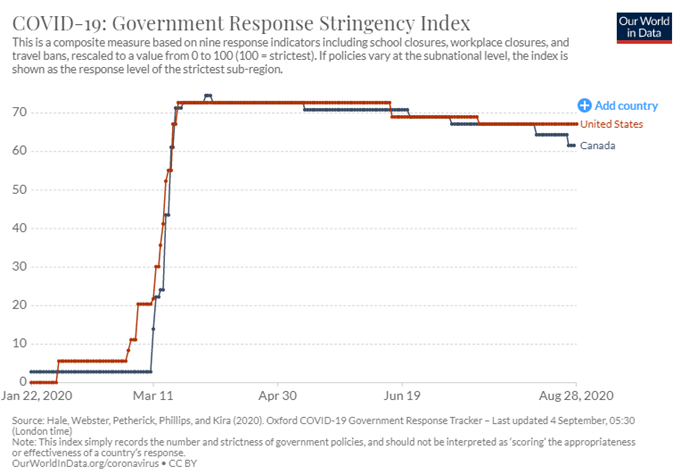 From a technical perspective the path of least resistance for USD/CAD rates remains skewed to the downside as price tracks within the confines of a descending Schiff Pitchfork.

Although RSI has climbed out of oversold territory it has yet to break convincingly above 30 to test the downtrend extending from late March, suggesting that the rally from the monthly low (1.3020) could be running out of steam.

Furthermore, the MACD indicator is still tracking in negative territory despite price climbing back above the psychologically pivotal 1.31 level.

Therefore, further losses appear in the offing if USD/CAD is unable to overcome resistance at the 21-day moving average and 38.2% Fibonacci (1.3199), with a daily close below the 50% Fibonacci probably signalling a resumption of the primary downtrend and carving a path to test the December 2019 low (1.2952).