The Euro may rise vs the British Pound and recover some of its losses after EUR/GBP fell over three percent and shattered key support levels along the way. Last week, markets rejoiced after news broke that the UK and Ireland may be able to forge a “path forward” in Brexit negotiations. The biggest knot policymakers have tried to untie has been over the controversial Irish backstop. Is a resolution on the table?

Market price action suggests traders were initially joyful as Sterling spiked against the Euro, though the Pound’s price action during Monday’s Asia session suggests investors’ optimism is now cooling. Eurozone industrial production data may curtail some of EUR/GBP’s recovery if it shows a softer print and further reinforces fears of a severe continental slowdown.

Having said that, EUR/GBP’s price action tomorrow – and really over the next week – will likely be dictated more by Brexit-related developments than by economic indicators coming out of the Eurozone. EU-UK negotiations are now at a critical juncture as the October 31 deadline approaches. Today, Queen Elizabeth II will open a new session of Parliament where she will outline Prime Minister Boris Johnson’s policy agenda.

All eyes will primarily be on this event and will be heavily scrutinized in light of how each decision this week may carry radical implications for how Brexit negotiations will proceed. Furthermore, the economically-light data docket alleviates traders from the burden of having to closely monitor economic publications. Having said that, focusing entirely on the perils of Brexit may prove to be a bigger strain than the former event risk. 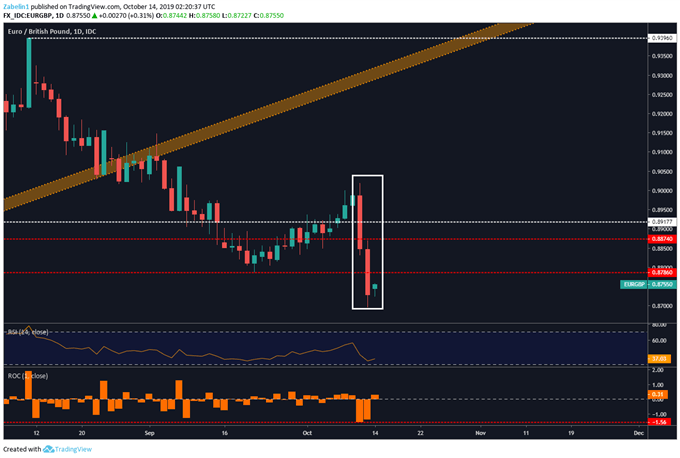