Sterling once again finds itself at the mercy of the volatile political developments in the ongoing Brexit negotiations. Cross-party talks between Theresa May and Jeremy Corbyn have been proving ‘difficult’ according too the Prime Minister’s Deputy, David Lidington. Despite rallying on local election results, GBP erased all of its gains against the backdrop of growing pessimism about the EU-UK divorce.

There is also growing support calling for May’s resignation, though the ability of her own party to call for a vote of no confidence is limited. They cannot call one until December 2019. However, Labour could be the one to call for a vote, though there is no guarantee that her replacement will bring any more certainty to what is an already-unpredictable situation.

The UK will also now have to participate in the continental-wide European Parliamentary elections at the end of this month, making hardcore Brexiteers who wanted independence from the EU hot under the collar. Inter-European relations will be put under further pressure because policymakers will now have to redistribute seats after officials reconfigured them in anticipation that the UK would have left by the March 29 deadline.

To receive timely updates and market reactions on the EP elections, you may follow me on Twitter @ZabelinDimitri.

In Europe, the economic docket is sparse, which may leave Euro crosses vulnerable to counter-currency risk. The same could not be said of the US. Later today, trade balance data will be published with an expectation of a -$50.1 billion reading. The upcoming data may act as a measure on the effectiveness of US President Donald Trump’s tariff tactics.

A worse-than-expected reading would only undermine his campaign to redesign the 21st – century global paradigm and could cost him political points in the 2020 election. The President has been flexing the proverbial-trading arm this week when he threatened further tariff measures against China and accused Beijing of breaking their “deal”. Markets now nervously eye how Beijing and Washington will – or won’t – proceed. 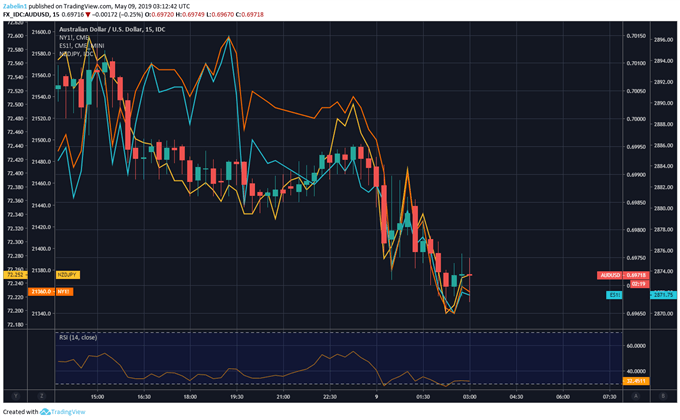