The Australian Dollar largely ignored mixed Chinese price growth data after CPI came in at the expected 2.5 percent and PPI at 0.9 percent, beating the 0.6 percent forecast. Midway into Thursday’s APAC trading hours, US President Donald Trump tweeted that Beijing had “broke[n] the deal” that he and Chinese officials are currently negotiating. However, this was not the only proactive move Mr. Trump has made this week. 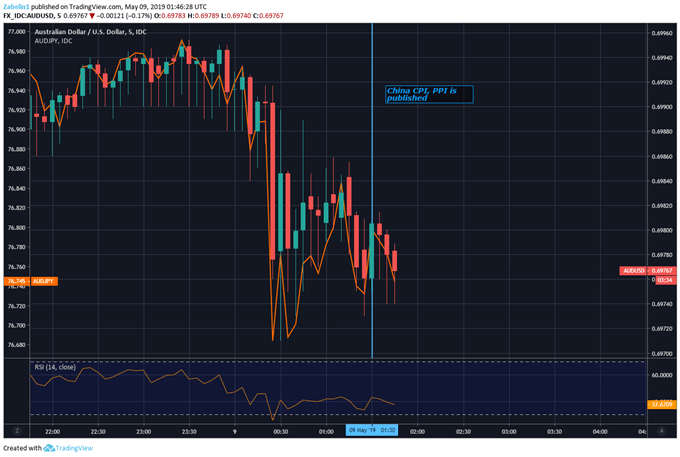 On Sunday, the President tweeted that an increase on $200 billion worth of Chinese goods from 10 percent to 25 percent will be implemented on Friday and threatened additional measures. This comes as Vice Premier Liu He will be arriving in Washington to discuss what was expected to be the final round of trade talks.

The sub-optimal political backdrop may not help the negotiation process, especially after news crossed the wires that Chinese officials are preparing to implement countermeasures to Washington’s tariff hike on Friday. Looking ahead, the fundamental theme of US-China trade relations will likely continue to dominate headlines as a major threat to global growth. Export-driven economies – particularly those close to China – will be watching these talks closely.

Following the RBA rate decision earlier this week to hold the OCR at 1.50 percent, Australian policymakers will continue to carefully monitor growth out of China, Australia’s biggest trading partner. Slower growth as a broad fundamental concern continues to weigh on global sentiment, with the RBA stating that “downside risks to the global outlook have increased.”

If the outlook worsens and weighs on sentiment, it may prompt capital flight from the already-battered Australian Dollar and could lead to a greater expectation of an RBA rate cut sooner rather than later. This may pressure AUD/JPY further after the pair already broke through support at 77.735.

The next possible major psychological barrier will be at 75.410. Deteriorating fundamental conditions will likely prompt investors to shift from chasing yields to preserve capital. This may boost the anti-risk Japanese Yen at the expense of the sentiment-linked Australian Dollar. 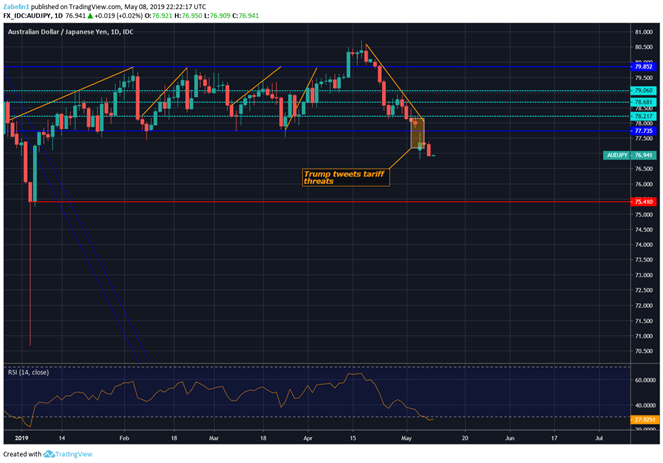