Gold prices came into the month of August with a full head of steam, soon setting a fresh all-time-high in the first week of the month. But, that first week didn’t close with strength, as the first Friday of August produced a bearish engulfing candlestick that was highlighted in the Gold Weekly Technical Forecast.

As shared in that article, that pattern produced the potential for a pullback as an overbought trend began to digest. And while the following fall appeared rather dramatic, with Gold prices shedding about 10% in a week, the sell-off didn’t last for long and support soon played-in from around a trendline projection.

Since then, however, price action has been fairly mean-reverting with support showing around the 1920-1941 area, also highlighted in that article a few weeks ago; with resistance coming in around the 1987-2009 spot, which was also highlighted but was previously being followed as a potential ‘s1’ spot of support. 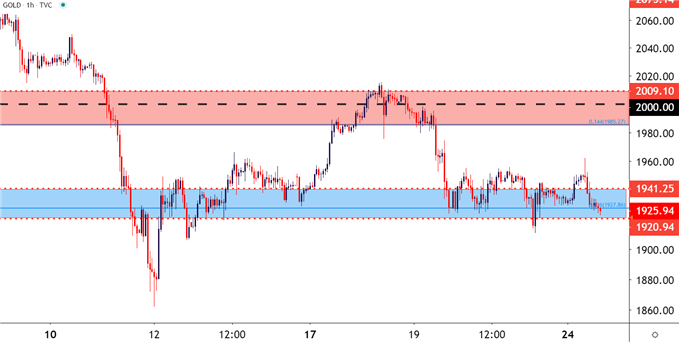 Gold Price Action and the Trouble with Timing Trends

At this point the big question is whether this is the spot that Gold bulls decide to take over again or, whether they’ll take a back seat to allow for a deeper retracement. Such is often the scenario when dealing with an overbought (or oversold) market. But the prior trend is rather clear, which was aggressively bullish, and the question as to whether or not this is set to extend will likely be determined by headline drivers. It just so happens that this week’s Jackson Hole Economic Symposium is one of those possible venues for motivation; as a veritable ‘who’s who’ in Global Central Banking will descend (virtually) upon Jackson Hole, Wyoming’s Zoom channel to talk about big picture issues for the global economy.

This can help to keep the focus on current support, with a breach above the 2009 level opening the door to the possibility of continuation for higher-highs and higher lows as buyers get back in the driver’s seat. 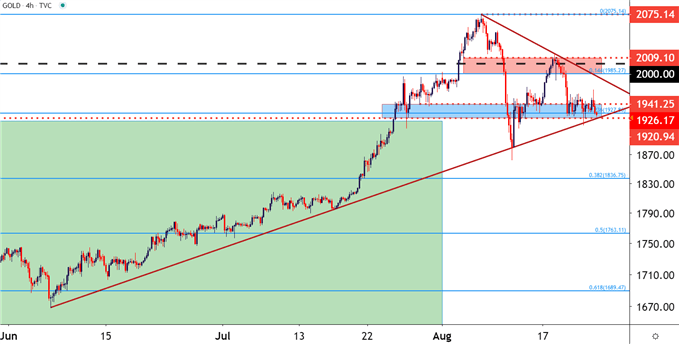