- This deepened retracements in EUR/USD and GBP/USD; and the topside move in USD/JPY continued to develop as the pair broke-above a key zone of resistance. We look at each below, along with an interesting setup in EUR/JPY.

- Want to see how Euro, Yen and GBP have held up to the DailyFX Forecasts? Click here for full access.

In yesterday’s article, we looked at the U.S. Dollar as the currency traded up to a fresh September high ahead of a heavy outlay of data and Central Banker speeches. And at yesterday’s speech from Fed Chair Janet Yellen, there were quite a few comments that seemed to catch the attention of market participants. Key of which was a statement that indicates that the Fed may not let persistent sub-target inflation keep them from additional rate hikes and policy normalization.

Given that the most recent CPI print out of the U.S. came-in at 1.9% and the Fed’s target is 2%, this would indicate that the Fed is ready to hike in December; and even if inflation remains sub-2%, that hike may still take place.

These set of comments gave a quick pop of strength to the Dollar after ‘DXY’ had faced resistance around the 93.00-handle for much of the day; but during the Asian and then the Euro session, USD-strength continued and prices ran up to set a fresh monthly high. 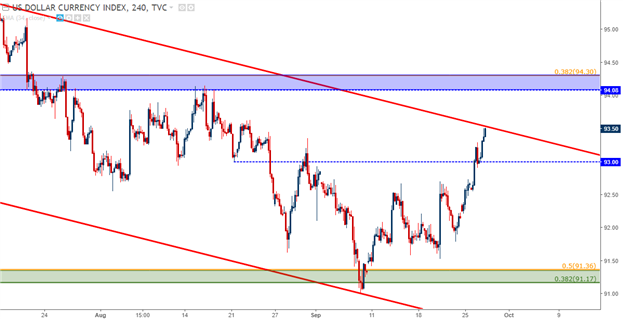 This deeper bullish move puts emphasis on that prior zone of resistance around 94.08 on the Greenback. If DXY is able to push above this resistance, we’ll be looking at fresh two month highs; and at that point, a continuation move of strength may be in order for re-tests of 95.00 and then 95.86. But until then, the longer-term bearish trend continues to show. 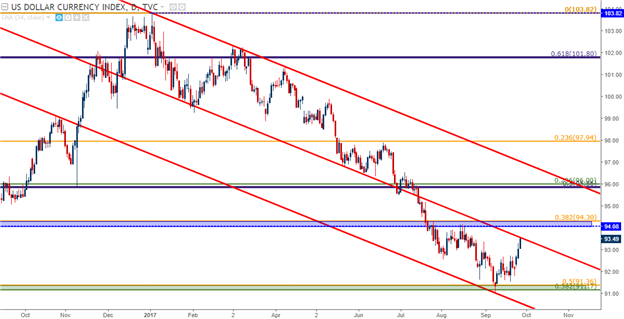 This continuation of U.S. Dollar strength has deepened the retracements we were looking at yesterday in EUR/USD and GBP/USD. And while Cable still remains a bit away from those deeper support points we were looking for, EUR/USD is currently testing the beginning of that ‘big picture’ support zone that runs from 1.1685-1.1736. The price of 1.1736 is the 38.2% Fibonacci retracement of the ECB QE move in the pair, and 1.1685 is the 23.6% retracement of the lifetime move in the pair, taking the low from the year 2000 up to the high in 2008. Perhaps more important than anything theoretical is the practical: This area helped to set support during the August retracement, just ahead of the Mario Draghi Jackson Hole Speech. 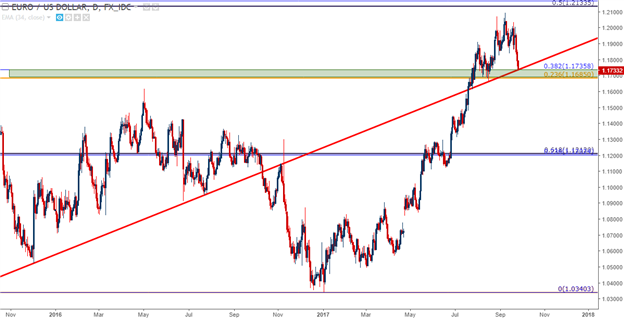 Meanwhile, if we move over to GBP/USD we’ll see that USD-strength continuing to price through, albeit a bit more tenuously. We looked at a bull flag formation in the pair in yesterday’s technical article on GBP/USD, and prices have only gotten more bearish since. We’ve seen a down-side break of channel support with resistance then showing up on the under-side of the bull flag, and this gives the appearance that a deeper retracement may be on the way. 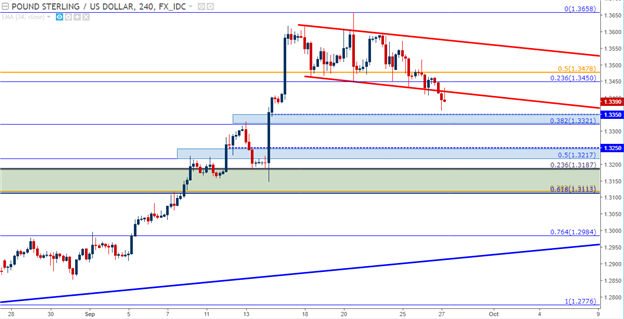 While USD-strength has continued, JPY has taken over as one of the weaker currencies available to FX traders. On Monday, we looked at a huge zone of resistance in USD/JPY that runs from 111.61-112.43. Within this zone are a number of Fibonacci levels, and throughout 2017, this area has been a key variant for support and resistance during USD/JPY’s range.

The open of this week saw prices initially move into that zone, and yesterday saw resistance show-up at the top-end of 112.43. With extension in the overnight session, we now have fresh two-month highs as the pair is trading above the 113.00 level, and this opens the door for bullish continuation after the prior bull flag formation gave way. 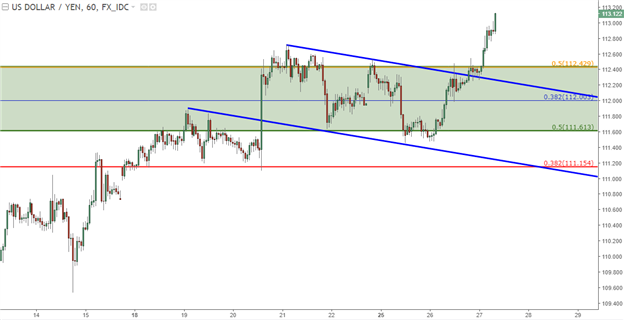 For traders looking to combine the above themes, the cross-pair of EUR/JPY could be interesting. This previous high-flying trend has seen a rather rigid pullback over the past week; but yesterday’s price action saw a Doji print with support at a prior point of resistance, giving the appearance of support after a ~270 pip pullback. We had written about EUR/JPY earlier on the morning, and that article is available for anyone looking for a bit more information about the setup.

For those looking for a bit of additional confirmation of continuation in the pair, a daily close of today’s candle above 133.07 would give us a morning star formation, which can be a fairly interesting bullish reversal setup, especially when we have what’s been a rather aggressive bullish trend of recent.

EUR/JPY Daily: Support at Prior Resistance 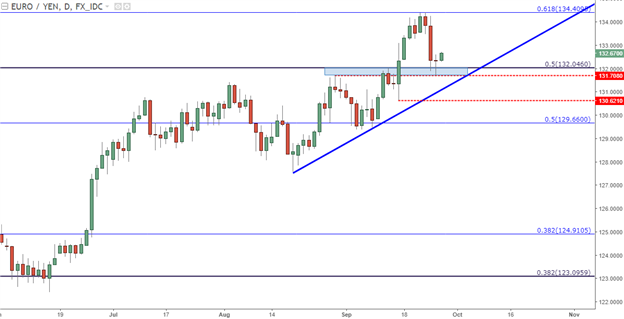