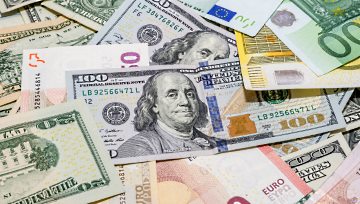 Euro, Yen and GBP Primed Ahead of Heavy Economic Calendar

- September has already been a busy month, and we are far from over as the final week contains a slew of high-impact data releases and Central Banker speeches.

- Additional political volatility crept-in over the weekend, but at this early stage has yet to bring a significant bearing to financial markets. Below, we look at three major markets that each see significant data items of interest this week.

Global Political Volatility Isn’t Yet Over

This weekend saw a couple of surprises on the political front in both Europe and Asia. In Europe, German elections were held on Sunday and as many expected, Germany Chancellor Angela Merkel won re-election. But what wasn’t expected was the strong showing by Populist Party, AfD, or Alternative for Deutschland. The AfD party took 94 of 709 available seats with a close to 13% vote nationwide, and this complicates matters for Chancellor Merkel’s Christian Democrat party to form a majority coalition. The center-left Social Democrat party with which the CDU has been allied as part of the ‘grand coalition’ decided to return to opposition after the party’s worst election showing since 1945. At this stage, hopes are that Chancellor Merkel will be able to build an alliance with the minority parties of the ‘FDP’ and ‘Greens’ as part of a “Jamaica Coalition” (due to the party’s colors mirroring the colors of the Jamaican flag). This could take months, and if it doesn’t take place at all – we could be heading for another round of elections in Germany.

In Japan – Prime Minister Shinzo Abe announced early general elections. This is an apparent strategy in which Mr. Abe looking to consolidate power as anxiety around North Korea continues to build within the country. Mr. Abe has been looking to revise Japan’s pacifist Constitution that’s been in effect since it was enacted by the United States in 1947, and as opposition has begun to build from a new party started by popular Tokyo Governor, Yuriko Koike; Mr. Abe may need to fend off threats to his Liberal Democrat party. Given that his approval rating has seen a recent bump around the anxiety emanating from the North Korean situation, this could give Mr. Abe an extra drive of support ahead of his campaign for a third term as Japanese Prime Minister.

Risk markets, for all of the weekend’s political volatility, have been fairly quiet so far. USD/JPY gapped-higher on the open, but that gap was quickly filled in the hours following and prices remain above the psychological 112.00 level.

This week’s calendar is absolutely loaded with potential drivers, from both a data perspective and from Central Banker-speak. We’re hearing from ECB President Mario Draghi (Monday, 9AM ET), Fed Chair Janet Yellen (Tuesday, 12:45 PM ET), BoC Governor Stephen Poloz (Wednesday, 12:55 PM ET), and BoE Governor Mark Carney (Thursday, 4:15 AM ET). Below are the high-impact events on the DailyFX Economic Calendar for this week. 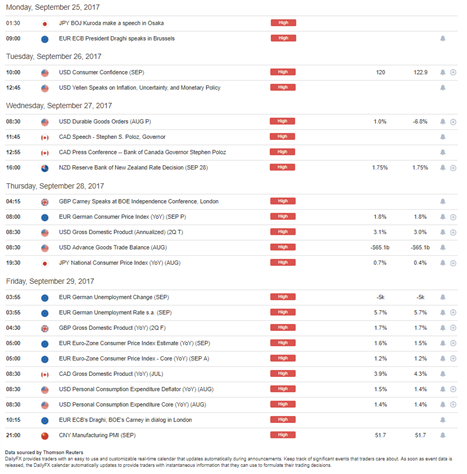 Last week saw a continuation of strength in USD/JPY as the pair rose to a fresh two-month high. This is likely being driven by a combination of factors: Yen weakness as worries around North Korea recede a bit behind the headlines, at least for now, combined with a dash of additional strength in the U.S. Dollar after last week’s FOMC meeting.

Given how dovish last week’s Bank of Japan meeting was, with only one dissenting vote that was actually voting in favor of even more stimulus – this could set up the Japanese Yen to remain as one of the more attractive funding currencies in the FX-space. 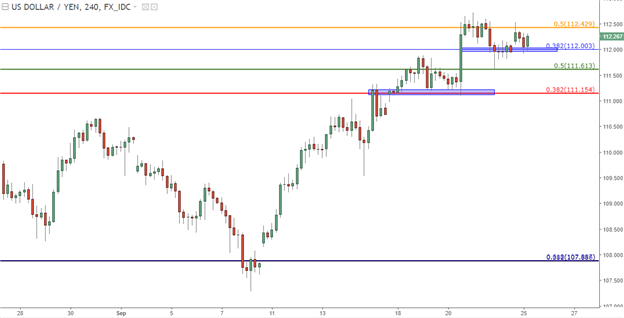 Also of interest for this week is whether the bullish move in the British Pound might find another gust of strength. Sterling put in an aggressive topside move earlier in the month when the Bank of England warned that interest rate hikes may be on the horizon; and for the bulk of last week, GBP/USD remained in a range-bound state between 1.3478-1.3600. The level at 1.3478 is a key Fib level, and this has offered numerous instances of intra-day support over the past week.

For traders looking to take-on short-USD exposure, this could be one of the more interesting markets to investigate. 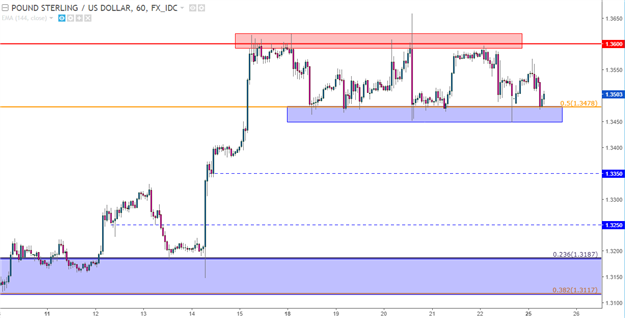 EUR/USD ran into 1.2000 in the latter part of August for the first time in over 2.5 years; and since then the pair has had a difficult time mustering bullish continuation. This could be derived from a series of factors, least of which is the European Central Bank’s reticence to announce any confirmed plans of stimulus exit.

While we’ve seen a range-bound formation build in GBP/USD over the past week, something similar has been taking place in EUR/USD for the past month. We’re nearing prior support, and this could be a potential spot to look for bullish continuation setups. But a bit below, we have what could be a more attractive area for the longer-term trend, between the prices of 1.1685-1.1736. 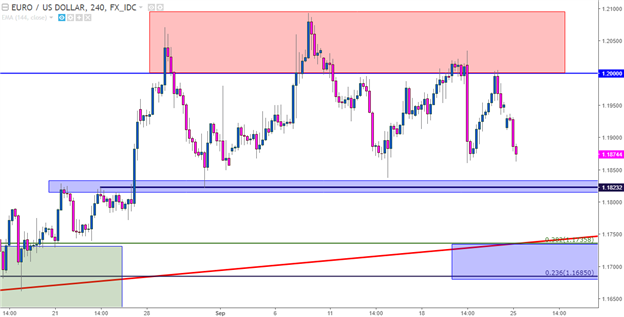