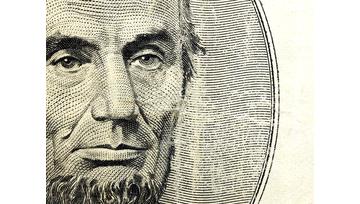 - The next two days present a heavy outlay of potential risk for the U.S. Dollar, as Fed Chair Janet Yellen testifies in front of Congress as the part of the Federal Reserve’s twice-annual Humphrey Hawkins testimony.

- Chair Yellen’s Monetary Report to Congress was released at 8:30 AM, and the Fed Chair commented that she thought balance sheet reduction would take place by the end of this year, along with gradual rate hikes going out to the end of next year.

Today marks the beginning of the Federal Reserve’s two-day Humphrey-Hawkins testimony. Today will see Fed Chair Janet Yellen speak to the House of Representatives Financial Services Committee at 10AM ET, and tomorrow she will speak to the Senate Banking Committee on Thursday at the same time.

At 8:30 AM, Fed Chair Janet Yellen’s Monetary Report to Congress was released ahead of this testimony. In those comments, Chair Yellen said that the Fed was going to look to begin to reduce the balance sheet by the end of the year, even with inflation slowing. She also said that gradual rate hikes are going to continue to be needed over the next few years, even with inflation being one of the biggest uncertainties that the bank is looking at currently. Chair Yellen’s persistence towards continued tightening appears to speak to a theme that was discussed at June’s rate hike, in which multiple members of the bank had expressed concern around financial risks brought upon by continued loose monetary conditions.

The net impact of Chair Yellen’s statement ahead of this testimony has been one of U.S. Dollar weakness, with the Greenback plunging down to test ten-month lows; and this came after resistance showed at the key Fibonacci level of 95.86 on DXY yesterday.

U.S. Dollar (via ‘DXY’) Near 10-Month Lows Ahead of Yellen Testimony 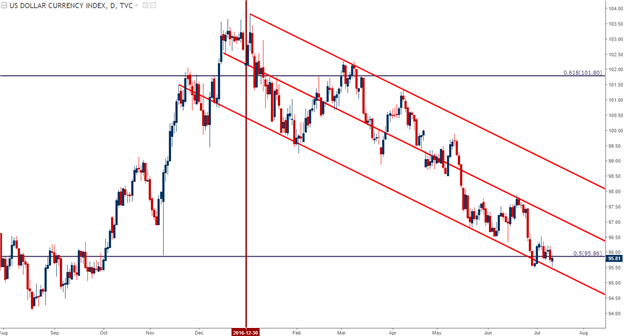 The pair that we’ve been tracking for USD-weakness posed an initial topside pop as this morning’s statement was released, as EUR/USD set another fresh 14-month high. As we discussed in the fundamental forecast for the Euro for this week, with no high-impact Euro data on the calendar and with no Mario Draghi speeches scheduled, the Euro had some ‘room to run’ and, at least at this point, we’ve seen a continuation of buyers coming-in to support the bullish trend.

Given that we’re likely in for some extended volatility in the Dollar over the next couple of days around this Yellen testimony, traders will likely want to avoid trying to chase EUR/USD as the potential for whipsaw is very high. As Chair Yellen is posed with various questions around current financial conditions, or around the Fed’s near-term monetary plans, it’s likely that we’ll see some degree of swing in price action.

For traders that do want to look to take on exposure during such periods, risk management is of the upmost importance as one of those swings that a trader is trying to fade can turn into an extended trend of adverse excursion. So, buyers looking to pick up EUR/USD at support will likely want to a) confirm that support is actually showing – as in, don’t just buy because a lower price level was hit on the chart, hoping that it turns around and b) when executing entries, ensure that stops are placed at an area where you want to be out of the move so that you don’t have to question your setup or your levels – if the stop gets hit, you can walk away from the trade with a clear mind that you took the proper swing and it just didn’t work out this time.

On the chart below, we’re looking at three potential support areas to watch in EUR/USD as we head in to this two-day testimony on Capitol Hill. 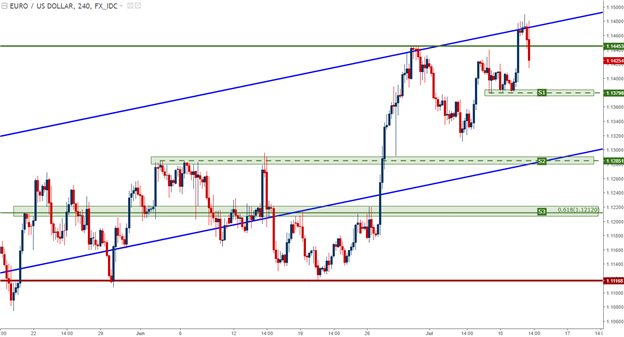 USD/JPY has finally caught some element of pullback – but now the big question is where that pullback might finally find support. Yen weakness has been a predominant trend in the FX market for almost a month now, starting with the reversal seen in mid-June. Since that mid-June reversal, USD/JPY has continued to see topside run as the Yen was one of the few currencies that was weaker than the U.S. Dollar. This is very rational, especially given that the Bank of Japan is one of the few that is not currently facing a ‘taper tantrum’ or worries about stimulus exit. With the Japanese economy continuing to see low inflation, the expectation is for the BoJ to remain very dovish which could continue to make the Yen one of the most attractive global ‘funding currencies’ for carry trades.

Yesterday saw that robust uptrend in USD/JPY run into a fresh four-month high at 114.50, which happens to be a 23.6% Fibonacci retracement of the post-Election move in the pair. Since then the pair has been offered-lower, catching a gust of weakness after this morning’s statement was released from Chair Yellen. Prices appear to be trying to garner some support around 113.00, but a bit-lower we have a really big zone of potential support that could be very interesting to bullish continuation strategies, and that resides from the prices of 111.61-112.40. 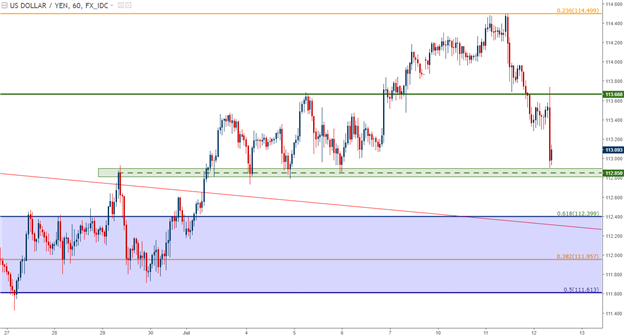