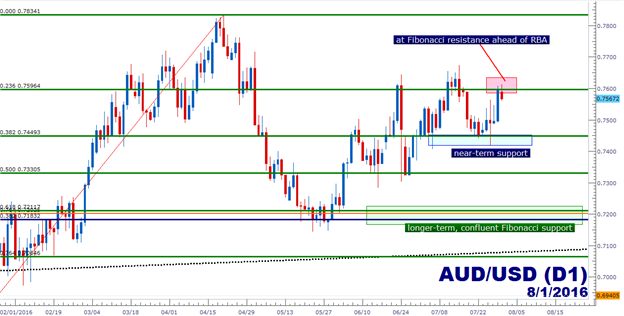 - Last week brought the Fed and BoJ and this week brings the RBA and BOE. And while little changed at last week’s announcements, expectations are high for rate moves from both the RBA and BOE.

- The U.S. Dollar put in an outsized bout of weakness after Friday’s GDP report helped to extinguish near-term rate-hike hopes for the U.S., but a Non-Farm Payrolls report on Friday will likely add some volatility to the U.S. Dollar, as U.S. employment remains a focus of the Federal Reserve.

Last week was big on the Central Bank front as we heard from both the Federal Reserve and the Bank of Japan, and this week brings another batch of Central Bank announcements out of Australia and the U.K. In last week’s announcements, nothing really ‘new’ was brought-in to markets. While the BoJ did increase ETF purchases, they didn’t bring the monetary bazooka that many were expecting; and while the Fed did make a slightly hawkish tweak to their statement, an abysmal GDP report on Friday made the prospect of any near-term rate hikes out of the U.S. seem less likely. This week, however, will likely see a rate move out of a major Central Bank; and then on Friday, we get the ‘big’ data point with Non-Farm Payrolls out of the United States for the month of July.

Later tonight the Reserve Bank of Australia announces their most recent rate decision, and this comes fresh on the heels of Australian inflation showing at a 17-year low. The RBA brought a surprise in May as they cut rates when many weren’t expecting it, and then in the RBA meeting minutes from July, the bank had pointed to near-term data for indications of future rate moves. This was largely inferred by markets to mean that a cut might be coming should Australian inflation continue to run below the bank’s target rate of 2-3%, and after last Tuesday’s CPI print, the RBA has the ammunition that they might need to make a 25 basis point adjustment. Fed funds is currently showing at 67% chance of a cut at tonight’s meeting, but the big question is whether the bank wants to stage the cut now or wait to evaluate additional data after that May adjustment. As we head into tonight’s interest rate decision, the Aussie finds itself at resistance against the U.S. Dollar, but still well elevated above the longer-term, confluent zone of support in the .7200-neighborhood.

This one has some build-up. After the Brexit referendum, the Bank of England was very proactive in their approach to markets. Mr. Mark Carney called numerous press conferences in the weeks following the referendum in order to assure markets that rate cuts and dovish policy cues would be coming, if needed, to offset an economic slowdown emanating from Brexit. This led many to expecting a cut at the bank’s meeting in July despite the fact that it would likely have been far too early to tell what toll Brexit may have actually taken on the U.K. economy at that point. August brings not only the rate decision from the Bank of England but also Quarterly Inflation reports and, traditionally, this is when the Bank of England would look to cut rates so that they could accompany the move with supporting data and projections.

And there can be a legitimate case to be made against a rate cut out of the U.K. at this point. After the tumultuous drop to the British Pound on the back of Brexit, potential for inflation in the economy is running higher. Should the BOE stage another cut and should the Pound drive lower on the back of that move, this could only increase the potential for higher inflation down-the-road. And how much would a 25 basis point rate cut actually help the British economy? 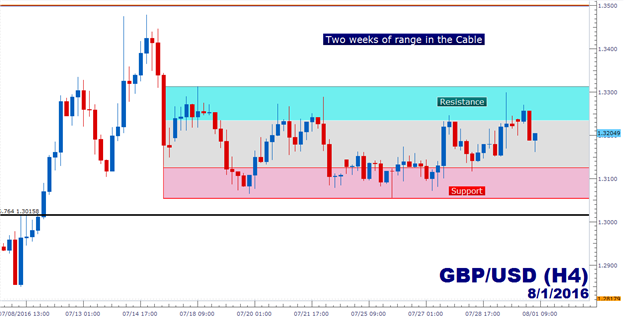 A bit of pressure has been removed here after Friday’s abysmal GDP report out of the United States; but after last week’s Federal Reserve statement saw the bank make a slightly hawkish tweak to their language, focus was likely to be averted towards U.S. data in order to gauge probabilities of future rate moves.

There’s been quite a bit of volatility in NFP numbers over the past two months, with last month’s report showing a blowout-beat and the month before that showing a blowout-miss. And these are certainly events that have caught the Fed’s attention, as the bank has seemingly changed their stance on the U.S. Labor market around the prints of each of these respective reports. At the bank’s June meeting, just after May NFP’s came in at an abysmal +11k, Chair Yellen noted weakness in the labor market as being a concern from the Bank. But just a month later we saw a strong headline-beat on NFP with +287k jobs added to American payrolls, and that led into the hawkish addition to July’s statement. This helped to drive rate expectations for the U.S. higher, but that all changed after Friday’s GDP report disappointed, printing at 1.2% versus a 2.5% expectation. 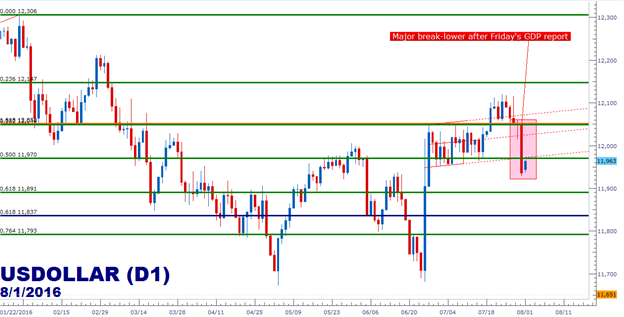