FOMC Goes ’Less Dovish’ but Markets Not Buying: July a Redux of April?

- Yesterday’s FOMC release saw the bank include a key phrase, saying ‘near-term risks to the economic outlook have diminished.’ This is a less-dovish statement and stance from the bank, and created about 3-minutes of USD strength; but traders quickly faded that move out of markets as the expectation for a passive Fed remains.

- This is very similar to what happened at April’s FOMC meeting, in which the bank removed a key phrase to provide a less-dovish statement, stoking a quick run of USD strength only to see markets fade the move shortly after. But in May, it became clear that the Fed felt markets were underpricing the chance of a hike in June, and this created a strong move of USD strength leading into June.

At yesterday’s FOMC decision the bank held rates flat as expected; and also as expected the Fed attempted to add a slightly hawkish line to their statement by including the phrase ‘near-term risks to the economic outlook have diminished.’ The immediate response to this additional phrase in the statement created a quick rush of USD-strength while risk markets like Gold and Stocks took a quick hit-lower. But that didn’t last for long… within mere minutes of the statement’s release traders were already using that quick rush of USD strength to buy-in to markets at more favorable prices. Gold was a prime example, selling off by more than $7 in the three minutes around the statement release, only to find support and start a rally that’s now seen more than $23 of run-higher. 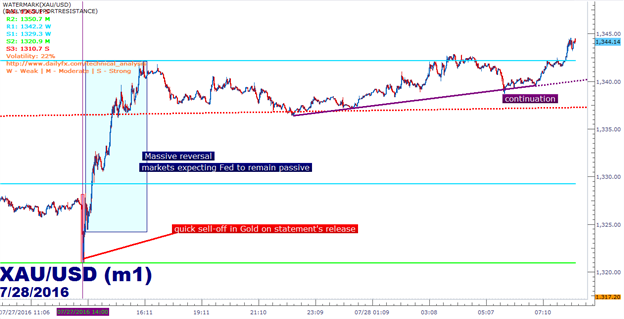 As you can see from the above chart, the after-effect of FOMC brought on continuation of the risk-on moves as USD-weakness continued to get priced-in to the market. On the chart below, we take a look at the US Dollar post-FOMC: 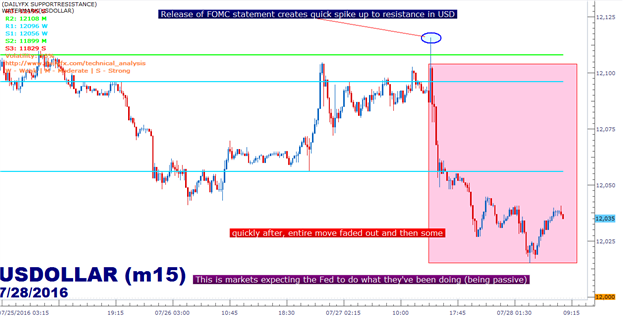 So the net takeaway of yesterday’s statement was that the Fed felt that the U.S. economy may be on more solid footing, but markets aren’t expecting them to raise rates anytime soon, as evidenced by the continuation of the trends emanating after the announcement. This is quite similar to what happened at the April FOMC meeting, which was also a non-Press Conference event. In that statement, the Fed had removed a dovish-phrase that had previously added fuel to markets under the presumption that the Fed wouldn’t hike anytime soon; so this was somewhat of a ‘less dovish’ example of wordsmithing.

Leading into April, the Fed had used the phrase of ‘The Committee continues to closely monitor inflation indicators and global economic and financial developments,’ as a hedge against global risks; with the thought being, even if the U.S. economy is growing strongly, the risk of a global slowdown may denominate the Fed to be in a passive position towards rate hikes. In April’s statement, that phrase was removed and this was a less-dovish statement that markets had similarly faded-out shortly after the statement’s release, with follow-thru continuation: 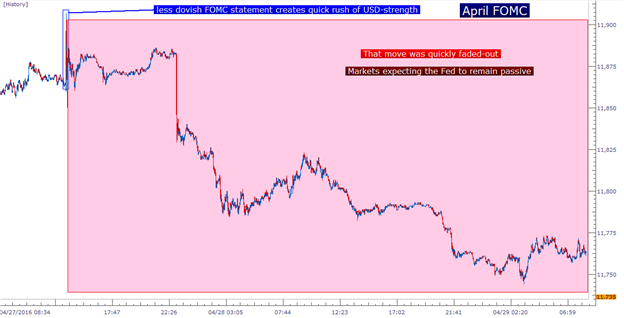 After that April Fed meeting, markets had pretty much priced-out the possibility of getting a rate hike in June. But when the meeting minutes from that rate decision were released, it showed that the Fed felt markets were underpricing the probability of a hike in the month of June. This is very similar to the bank’s posture in Q4 of last year when, despite the numerous flagging risks of commodity prices getting crushed while Chinese markets continued to implode, the bank talked up the prospect of higher rates in the U.S. , even going so far as to expect a full four rate hikes in 2016 after the first rate hike in over nine years in December.

Price action following April’s meeting showed a quick rush of USD strength around the release of the statement, followed by an aggressive reversal that brought three days of selling in the Greenback. But, on May 3rd the RBA surprised the world with an interest rate cut and this started a streak of USD gains that lasted through May; further driven by the release of FOMC meeting minutes from April that showed the bank felt markets were underpricing the probability of a June hike. And this strength in USD lasted all the way into June when an abysmal Non-Farm Payrolls report showed a meager 11k jobs added to American payrolls; thereby removing pressure from the Fed to hike rates and virtually removing any expectations for a hike in June. 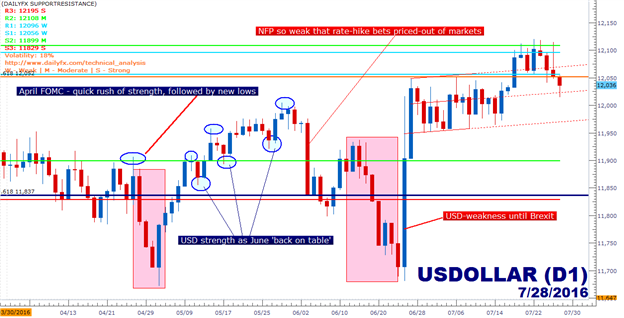 Are we headed for a redux of April/May/June in the US Dollar?

Given the reaction to yesterday’s FOMC statement it’s rather clear that markets aren’t expecting the Fed to make a move anytime soon. But this may be an early assumption, as very recent examples have furthered the pattern of persistence that the bank has shown towards the prospect of normalization, with the most recent example taking place at the April meeting with price action throughout the month of May.

The meeting minutes from yesterday’s rate decision will be released three weeks after the meeting, on August 17th and this will give markets a clearer view of how the Fed is looking to mold rate policy in the months ahead. The next meeting is in September and markets are currently pricing-in an approximate 18% chance of a hike at that meeting and a 36.8% chance of a hike in December. Given that stock prices are remaining near all-time highs and also given the Fed’s prior pattern of persistence towards trying to normalize rate policy, these odds may be relatively low, and we may be seeing support in the USD in the not-too-distant future.

Expect U.S. data to take on slightly more importance now, particularly with stronger prints. Stronger data in the U.S. may see traders attempting to anticipate any potential moves from the Fed by pricing-in USD strength (much like the price action seen in the month of May).