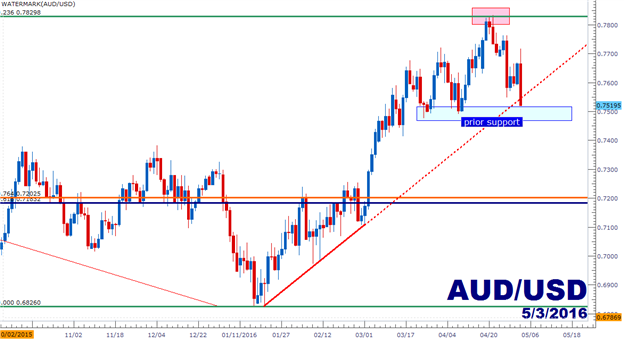 The Dollar Has Finally Caught a Bid, but How Long Might This Last?

- The world saw another interest rate cut last night as Australia cut rates in an attempt to offset a strong Aussie while deflationary forces have begun to show.

- This has finally helped bring a small bout of strength into the Dow Jones FXCM Dollar Index, but after a massive move lower the big question is one of sustainability.

Australia cut interest rates to an all-time low of 1.75% last night, moving rates lower by 25 basis points in an attempt to counteract the deflationary forces that have resulted from a combined slowdown in both China and commodity prices.

One of the drivers of the recent bout of recovery across financial markets has been an extremely weak US Dollar, and that just complicates matters even further for an economy like Australia, as they’re simultaneously seeing deflationary pressures while also dealing with a stronger currency. Last night’s cut to interest rates could begin to address that Australian Dollar strength after the 1,000 pip run that the currency put in against the US Dollar in a little over three months.

The bigger question here, of course, is one of sustainability. As in, after a fairly strong run higher, is this one interest rate cut going to be enough to turn the tide of the trend? If anything, it doesn’t appear that this will be a rate cut in isolation; as further cuts may be coming down the road.

For now, AUD/USD is still showing a bullish structure, with last night’s rate-cut driven move taking price action down to an upward-sloping trend-line (shown in red below). The last swing high, set just two weeks ago, came in right at the 23.6% Fibonacci retracement of the recent move (the 2011 high to the 2016 low, shown in green), and this indicates that the move may have more room to run to the up-side.

Traders can look for support to develop around the .7500 psychological level where we had seen previous support, and should price action indicate support in this vicinity, there could be a top-side trend resumption entry in the not-too-distant future.

USD has One-Year Lows In-Sight: The rampant recent bout of weakness in the Greenback has continued. Yesterday/last night saw an even deeper slide into support, and we’ve come just .3% from the one-year low on the Dow Jones FXCM Dollar Index. Last night’s RBA cut has brought a modicum of strength into the currency after a precipitous slide (AUD/USD is one of four components in the Dow Jones FXCM Dollar Index); but with a trend this aggressive and a Federal Reserve that doesn’t look ready to hike rates anytime soon (next meeting is all the way in the middle of June), traders would likely want to wait for resistance before selling more.

On the chart below, we go over recent price action structure in USD. We had outlined the approach a few weeks ago and that structure still stands. At the time, we had just run down to a confluent zone at 11,836-11,837; and as we looked at, waiting for resistance would likely be advisable. Within a couple of short days, resistance had come in and then lower-lows were printing shortly thereafter.

These lower-lows, combined with Fibonacci retracement levels could provide usable information moving forward. Traders can look for resistance to develop at these intervals, in zones of ~11,750, 11,800, and again at 11,836-11,837 to plot re-entries in the short USD theme. 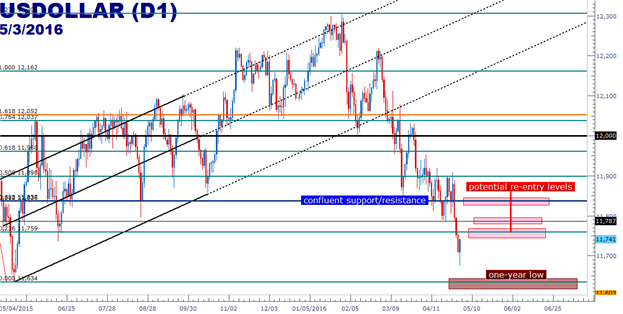 One area that’s really shown that weak USD is in the Euro: Much to the chagrin of the European Central Bank, EUR/USD just continues to run higher. We’ve seen yet another interesting technical indication over the past 24 hours, and this is one that links back to last year’s tumultuous ride.

We had discussed the long-term bear flag in EUR/USD quite a bit over the past year. After the massive drop leading into 2015, EUR/USD spent a large portion of last year forming an upward sloping trend-channel which, when taken in terms of the prior down-side move makes for a bear flag formation.

This upward sloping channel didn’t break until October’s ECB meeting when Mario Draghi pledged to ‘re-examine’ QE at the bank’s next meeting in December. But when the December ECB meeting failed to unveil any new policies, EUR/USD began its ascent, eventually finding resistance off of the under-side of the prior bear-flag formation.

Throughout much of 2016, we’ve seen USD weakness and this has only further contributed to the rise in EUR/USD; with the pair continuing to exhibit ‘higher-highs’ and ‘higher-lows,’ after a very recent visit to a well-heeled support level.

With the under-side of this bear flag coming into play yet again, traders would likely want to wait for a more attractive entry before chasing the move higher. The prior batch of resistance in the 1.1418 area may become a usable level in the not-too-distant future, as we outlined in Market Talk to cap off last week. 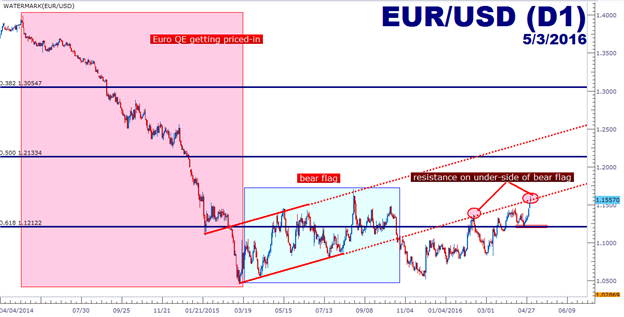