- USD Reversals have continued at a brisk pace, but is this a legitimate reversal or just a bounce in the down-trend? Given that this bounce took place at a critical support level, the latter would appear more probabilistic from here.

- Chinese trade data showed a positive surprise in the overnight, and this has brought significant strength into global equities, particularly those out of Asia.

USD Strength Setting the Table: Perhaps one of the more pervasive observations over the past 24 hours has been USD-strength. This USD-strength has come-in right with Euro weakness, Yen weakness, and strength in both global equities and commodities.

At issue is whether or not this may be a lasting move in the greenback. Looking at the chart of the Dow Jones FXCM USD index will highlight a critical support level that’s given a bounce. This is a confluent level of support at 11,837. There are two different Fibonacci levels within a single point, with 11,837 being the 61.8% retracement of the ‘big picture’ move (shown in blue - taking the 2002 high to the 2011 low), and 11,836 being the 38.2% retracement of the prior major move (shown in green - taking the April 2015 high to the May 2015 low). 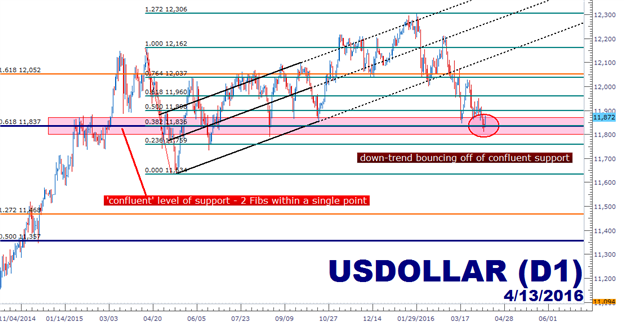 Be careful of chasing the US Dollar higher here. With such a strong level of support, it rations to imagine that selling may have slow as we moved nearer to that support level; but it doesn’t mean that the trend will reverse. If anything, such an observation just urges caution. This is similar to the observation we pointed out two days ago when USD/JPY was showing divergence within the RSI indicator. This doesn’t necessarily mean to ‘buy’ as much as it means ‘be careful of selling here.’

Instead, traders can wait for the retracement to run its course. And when it appears that the retracement in the down-trend may have found resistance, then the trader can take the shot of triggering the short. The benefit being that this resistance allows you to manage your risk: So if this setup doesn’t materialize, you aren’t wounded too badly and can take another shot at the next level of resistance. On the chart below, we’re taking a closer look at the US Dollar index with potential resistance levels outlined. Traders can look to strategize this trade against Euros, Yen or Australian Dollars. 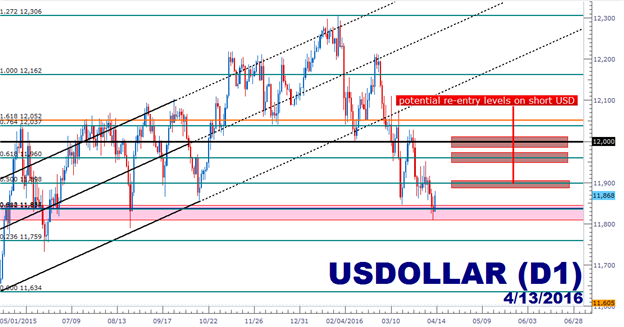 Big Surprise from Chinese Trade Data: The big takeaway this morning is equity strength being seen pretty much everywhere around the world. The catalyst appears to have been a significantly better-than-expected set of Chinese trade numbers, as Chinese exports improved by +11.5% in March from a year earlier, with imports declining by -7.6%. This is a huge change, as just a month ago we saw Chinese exports drop by the most since the Financial Collapse with a -25.4% decrease to exports with imports coming in at -8%.

This surprise improvement in exports gives hope that the moves being made by the government to assist the conversion of the Chinese economy to being more service-based may be bearing fruit. And while it’s still far too early to say that for sure, initial signs of inflation may be pointing in that direction as well. While inflation has stayed lackluster and has been virtually non-existent in developed economies, China is beginning to see prices increasing. Just last month we heard about the rocketing property prices in Tier 1 cities (Shenzhen property prices were up 50% year over year in January), while much of the rest of the country saw little demand for real estate with much more modest price increases. And just last week our own Renee Mu spoke about the massive increases that have been seen in pork prices, which for China is huge as this is a staple of the Chinese diet.

But are 50% inflationary reads (in one year) in key markets, like food or real estate, really the positive type of inflation that markets and economists are looking for? Or are these reads, perhaps, resultant from the flurry of actions triggered out of Beijing to try to offset the inevitable slowdown that is and will be hitting the Chinese economy? And further, will these actions and themes just magnify the complexity of the next wave of panic or fear that may envelop global markets? As things like food and shelter begin to become impacted by economic policy, the risk of a societal impact (and reaction) increases.

And to balance out this ebullience, keep in mind that not all is well with China just yet. Yesterday saw reports of the first ever State-Owned Enterprise having to halt trading in their own bonds due to financial difficulties. And the government’s plan to package together non-performing loans (bad debt) into stock-like investments can raise numerous concerns to continued funding within the economy.

But for now, near-term price action in Asia equities is bullish. On the chart below, we’re looking at the Hang Seng (HKG33) with the Nikkei overlaid. 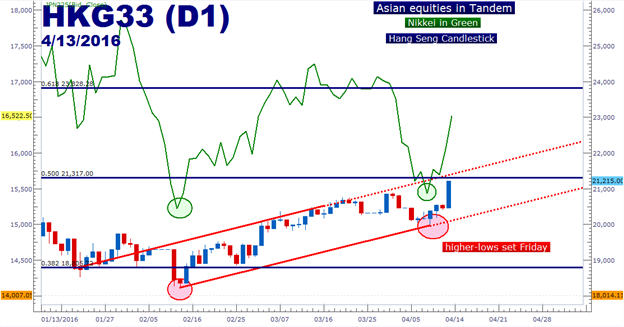