Chinese GDP Falls Again: This Trend is Not a Friend

- Chinese GDP came in lower yet again, printing at 6.8% after last quarter’s first fall below 7% for the first time since the financial collapse.

- Chinese stocks caught a strong bid last night after the bad news with aggressive price action, with the deductive response of investors increasing expectations for additional stimulus out of China.

- Investors appear to be using this run higher on the morning to sell at better prices, as weakness has begun to come into many major bourses on the early portion of the morning.

Chinese GDP has become a massively important number as the Chinese economy slows and investors attempt to get a sense of how aggressively this slowdown may be hitting. We discussed this theme back in October as Chinese GDP fell below 7% for the first time since the Financial Collapse, at which point markets around the world heated up their rallies as hopes and expectations for even more Central Bank action picked up. Just a few days after that GDP print and small-cap Chinese stocks were off to the races as fears of an Asian meltdown receded behind hopes for policy action out of Beijing.

The fears around Chinese GDP are that a larger-than-expected slowdown will sucker punch the global economy to the point that global growth stalls further from its already anemic levels. Last night, we received just our most recent piece of evidence that the slowdown in China is hitting more aggressively than originally feared as Chinese GDP printed at 6.8% versus an expectation of 6.9%. And sure, we’re talking about just one-tenth of one-percent here, but as always in financial markets, the context is pertinent. The table below shows how this 6.8% print to cap off the year reflects on China’s growth in comparison to the 25 years previous:

China’s story really starts in 1978 when the economy was opened-up in response to mass famines that had taken place under communist rule. As the economy began to open, green shoots popped up everywhere, and from 1978 to 2013, growth averaged between 9.5-11.5%. This Chinese growth story has been called a ‘miracle,’ when a down-trodden and starving nation was converted into a productive country with a pivotal role in the progress of the global economy. Since reforms were put in place in 1978 under Deng Xiaoping, China’s GDP has increased ten-fold.

Growth rates since 1978 have been at a break-neck pace as an enormous and well-diversified geography combined with a populace of 1.3 billion people have allowed China to grow more quickly than any other nation in the history of the developed world. And this has been great for the rest of the world: As China’s grown larger and larger they’ve taken on a critical role in the growth of the world.

For a country like China, one of the easiest ways to grow is through exports. Starting off as a poor country meant that producers could build in China more cheaply than they could build at home. So production moved into China as foreign companies looked to take advantage of this dichotomy, and this type of trade is what grew China for the first 30 years after the reforms were put in place. As producers built products in China, this brought much needed capital into the country. Eventually a middle-class began to build, and now China had consumers that could actually buy some of the products that were created in the country. This is the ‘rising middle class’ that you keep hearing about, or China’s attempt to convert to a more ‘consumer-oriented’ culture. For an example of this theme in-play today, check out the article Follow the Leader: Apple, Oil to Cue Global Markets.

The prospect of a robust middle class is huge for the continued story of Chinese growth, because without a strong consumer-segment within the economy, China is forced to fly with global economic headwinds; facing brutal slowdowns as the world contracts and deflates and has less need to produce goods in China. 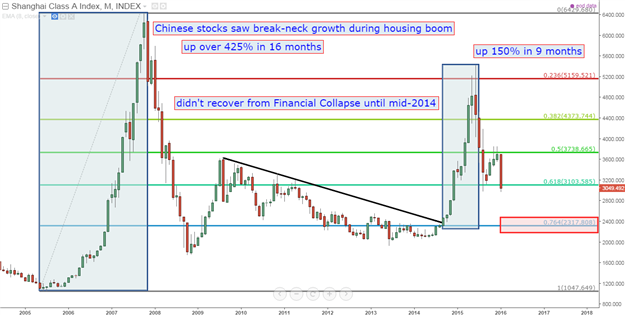 This just puts further focus on the GDP numbers being released by China so that we can get a sense of a) how aggressively the slowdown is hitting in China and b) to see how responsive the growing consumer-segment of the country is (or has been) to these economic headwinds.

But after that 12% number was hit, things have only gotten uglier. The bar has been lowered and lowered, and coming into this year the hope was for a 7% growth rate in GDP. To be sure, this is still a really brisk rate of growth that many other economies would love to see; but for China, there were some questions around these numbers.

Primarily in the way of accounting: In the United States or Europe, if something is built, it doesn’t count towards GDP until a transaction actually takes place and money exchanges hands. This makes sense, right? Because for that building to count for GDP, someone needs to buy it or lease it out to begin allowing businesses to take advantage of this newly created space.

In China, matters don’t work like that: In China, as soon as that building is built it counts towards GDP, regardless of whether or not anyone ever lives in it or buys it or even ever uses it. So China has a quick way to increase their GDP numbers with government spending projects, regardless of whether or not that building unit ever becomes contributory towards GDP.

And this is the type of thing that has many investors freaked out about a slowdown in China. Because as the economy is growing, ‘ghost cities’ can continue to be built without much concern. Investors are still buying debt, so companies and government can continue selling that debt to bring in new capital to simply build more buildings (despite the fact that nobody is living in any of them), and this still continues to stoke an already robust GDP number. But what happens when a slowdown occurs and investors are no longer rampantly buying debt and injecting capital into the economy? Not only do those ghost cities become difficult to continue financing, but keeping the economy running even at a moderate speed can become a challenge as well. And for a world that’s become immune to near-7% growth rates, how does the economy continue to grow at its breakneck pace?