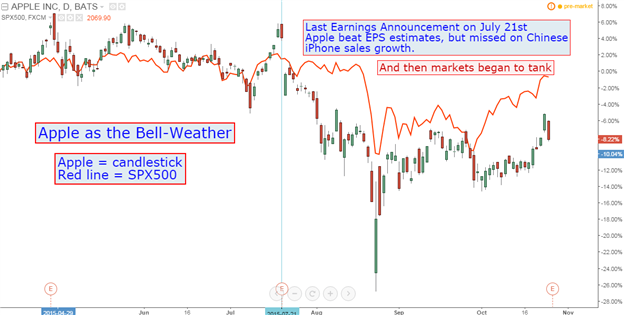 1. Global stocks are tepidly awaiting the onslaught of news: Global stocks have been semi-soft thus far on the week. China had another ‘late-session ramp’ to close barely in positive territory in the Monday session, and Europe closed lower as did the United States. Last night, we had yet another late-session ramp in Chinese equity markets that saw both the Shanghai (SHCOMP) and Shenzhen Composites (SZCOMP) erase more than -3% worth of losses to close, yet again, just barely in positive territory. And most stock indices in Europe are down slightly ahead of the US market open.

The rest of this week is going to be loaded with data, led of course by Central Bankers. We hear from the Fed tomorrow and the RBNZ shortly after that. Thursday night brings on the BOJ in an announcement that many have begun to expect an increase in Japanese QE. And even outside of Central Bank announcements, the calendar is loaded: Just out of the United States we get Consumer Confidence later today, Trade Numbers tomorrow morning, and GDP on Thursday. Australian CPI comes out tonight, Germany unemployment on Thursday morning, and German CPI a little later, followed by European CPI and Canadian GDP on Friday.

But even outside of that – we get earnings from Apple today after the bell, and this could be looked at as a leading indicator for China. As Apple has continued to develop, they’ve come to rely on future growth coming from China, and particularly iPhone sales in China. At their last earnings announcement, they beat estimates, but the stock still went down. Do you want to guess why? Because they missed their Chinese iPhone sales estimates, and this was looked at as a drain on future numbers for the company. This was on July 21st, and this was the day that the S&P started its descent before going into full-on meltdown mode in August.

So watch Apple earnings this afternoon, and not for the headline number – but for forward guidance for this holiday season and the company’s performance in their most critical growth market of China. Expect global risk trends to take cues from what Apple says.

On the chart below, we’re looking at Apple (AAPL) as the candlestick chart and the SPX500 as the red-line overlay. The last earnings release on July 21st is notated on the chart with a vertical line, and notice how this earnings beat happened right at the crest of the declines; and further – notice the correlated performance that we’ve seen between these two studies before and after that announcement. Apple is trading like a bell-weather for American stocks (and the world in general).

2. Oil is Bringing Back those Bearish Ways: One of the unexpected factors that’s really thrown global markets for a loop in 2015 was the continued bleeding in the price of oil. US Oil (WTI) ended 2014 on a very sour note, having dropped from a high of over $107.50 in June to close the year under $53. But the bigger carnage came from the impact of these drooping prices, as economies centralized around commodities (such as Australia, Brazil, Canada, Russia, Venezuela to name a few), and commodity-heavy companies within many developed economies (such as shale-extraction companies in the United States) saw margins get squeezed to where, in many cases, they aren’t even breaking-even by continuing to extract oil.

This has become so profound that we’ve even heard the IMF give warning that Saudi Arabia will be bankrupt by 2020 if the government maintains their current policies. This was once an unthinkable and outlandish prospect, as pretty much any analyst in the world would’ve bet that Saudi Arabia would’ve run out of Oil far before they’d ever run out of cash; but this is yet another consequence of ZIRP as falling oil and commodity prices have snared the global economy.

As the price of oil drops further, pressure increases on the entire global economy. While lower oil prices were once thought to have a stimulative effect, at least in the United States, the recent increase in Shale extraction and the large amounts of debt taken out by these firms (which is essentially a carry trade, borrowing while yields are low, and investing in a higher yielding product like oil, which works until prices drop) expose the entire American financial system to the woes of the commodity markets. Not only will we likely see additional pain in commodity-based economies as oil prices drop further, but even developed economies will likely see pain as banks and investors take hits from oil-extraction and refining companies that have taken out debt to finance operations based on Oil being over $100/barrel. If you want to follow this theme along, add the ticker symbol ‘HYG’ to your watch lists: This is an ETF that represents high-yield bonds, and this is one of the areas of the debt-market that’s carrying considerable exposure to commodity extraction. As commodity prices tumble, so does the prospect of those high-yield/Junk bonds being paid off, and in-turn, prices tumble lower to reflect this lower probability of pay-off. We’ve seen prices in HYG ascend with other risk assets throughout October, but we’re still in a bearish posture, as we have yet to take out the previous swing-high at $86.50.

Of all the factors that could bring a negative impact to the economy over the next couple of years, including China, the Fed, or any of the other litanous concerns that have enveloped financial markets since the financial collapse, the end of the commodity super-cycle and, in turn, the continued fall in the price of Oil could probably be the most concerning; because, frankly, Central Bankers can’t stimulate the price of Oil. Oil at $20 or $30 a barrel is an entirely new world.

We discussed a short-setup in Oil last Monday after a higher-low was set just shy of $47.50. The first target has already been hit, and we’ve just entered the zone for the second target at $42.76, and the third target is a bit lower at $48.83. Should the psychological level of $40 give way that opens the door for the 7-year low at $37.73. 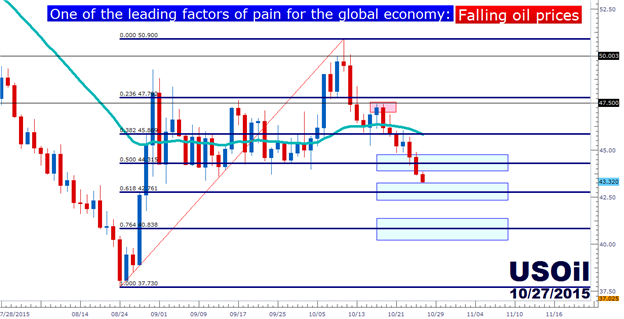 3. This could be a chance to pick on the Bank of Japan: We’ve been discussing this theme over the past couple of months, and we reiterated yesterday: The Bank of Japan has found themselves in a tough spot. After three years of QE, the economy still hasn’t met their inflation targets and with the multiple pressure points in the global economy becoming triggered, key of which for Japan is the slowdown in China as this is a key trading partner for the economy, many have begun to deductively expect that the Bank of Japan will increase or extend their QE-outlay at their next meeting this Friday (Thursday night in the United States). This is somewhat built on the surprise that the Bank had delivered last year, when they made a surprise announcement on Halloween that caught markets by surprise, and this is what allowed the extended ramp in USD/JPY that saw the pair finally break above the 110.00 level to ascend all the way to 125.00.

There is only one problem with this theory: There have been no signals from the Bank of Japan that they’d look to increase or extend QE, at least not yet. As a matter-of-fact, most evidence that we have from the bank at this point would allude to the contrary point-of-view. And given the fact that China just changed the way that they’re going to manage their own currency, it would be logical for Japan to take on a more cautious approach, choosing to keep some powder dry for down-the-road should they need to trigger another round of stimulus in 2016 or 2017.

This could expose the Yen as favored theme, as the Bank of Japan not electing to increase stimulus could see carry trades unwind as a US rate hike gets kicked further down-the-road. We discussed the prospect of buying Yen against the Euro, as the recent announcement from the ECB to re-examine their QE-outlay in December could be enough to continue driving Euro weakness, and if these theme could be paired up with a strong-Yen, traders would have the luxury of a one-sided down-trend. We discussed this setup in the EUR/JPY Daily Classical piece yesterday.

But more-to-the-point from a Macro sense, USD/JPY could illustrate these expectations ahead of the release. Watch 121.75 for resistance, and 118 for support on USD/JPY for potential breakout/trend-directional entries. On the chart below, you’ll notice considerable congestion over the past two months after China’s Black Monday. This is what often happens before a really big move. Notice how we ascended last week as USD-bullishness reigned supreme, but we’ve had two aggressive days of selling in the pair thus far on the week as BOJ officials have talked down the prospect of more easing. 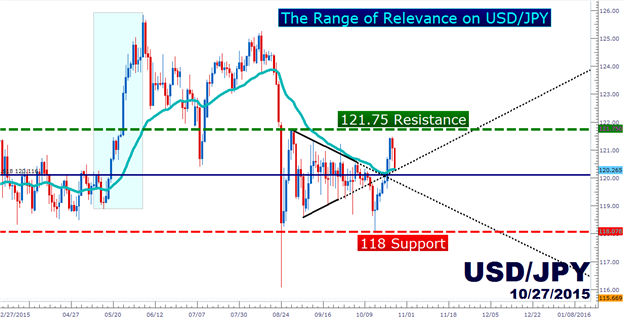