1. Chinese data has been rough of late . Just yesterday, we saw the country miss their 7% growth target for the first time since the Financial Collapse, and last week we saw an abysmal trade report that had a contraction of over 20% for imports. And for a global economy that’s come to depend on China for a large portion of its growth – that’s troubling. But if you’re looking at Chinese stocks, you wouldn’t notice that anything was wrong.

Since bottoming on September 15th, the Shenzhen Composite (SZCOMP), which largely consists of small technology stocks, is up over 34%. The ChiNext Composite Index traded more than 5 billion shares on Friday of last week, a new record that eclipses any volume amounts that were seen during the rally earlier in the year that catapulted stocks up over 100% year-over-year, and led to the panic moves and the fear of a ‘bubble popping’ in June, July and August. This index had plunged as much as 54% from its June highs, and in early September – this index was pretty much dead as volumes had fallen off by more than 99%. What was previously one of the most active futures markets in the world became completely quiet as regulators had tightened position limits and started a probe into ‘malicious short sellers.’

At the heart of the move is increased margin trading in small, low-priced stocks. Margin debt has increased for seven consecutive days, and this is very similar to the type of increases in margin trading that led to the summer fall, as retail traders increased margin to chase high-flying stocks. And the fact that the rebound in Shanghai, where larger and more stable companies are listed, has been significantly lighter than what we’ve seen in more volatile types of names points to the fact that investors are bidding up smaller, more speculative companies instead of more-established blue chip names.

This would allude to the fact that this rebound being seen in China, and hence, Asia – is retail driven and may be short-lived. Investors are lining up with anticipation that more government intervention may be coming down the road. From China – this is a fairly sound bet, as it’s largely expected that we’ll see at least another interest rate cut, and likely a cut to bank reserve requirements before the end of the year.

But the bigger question is the Fed, and whether they’ll back off of a 2015 rate hike or not. For now, risk is on under the anticipation of ‘looser for longer.’ But this story isn’t over yet. 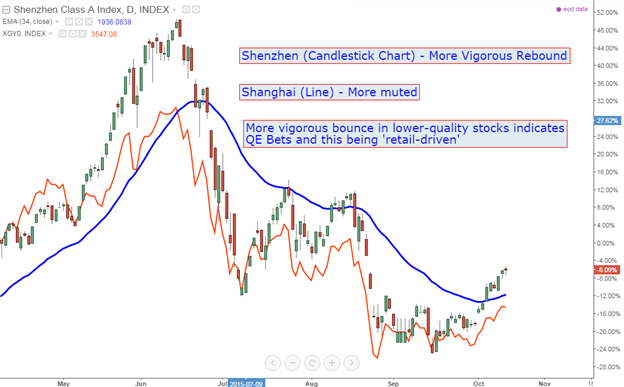 2. Weak Chinese GDP may have bought Mario Draghi some time: The primary driver across markets right now is hope. And not the good kind of hope either, the kind that is hopeful for improved economic performance. This hope is actually looking for worse data, in order to setup more QE down-the-road. Europe is the ultimate example of this right now, as a recently triggered QE program has shown some initial signs of promise, but for all intents and purposes, it hasn’t yet worked. Europe is still seeing lackluster inflation, and just last month the stalwart of the European economy, Germany, fell into deflation. This is troubling considering the potential storm brewing in the East, and this has led many to believe that the European Central Bank will increase their QE-efforts in the not-too-distant future.

But yesterday’s GDP print out of China wasn’t really all that bad; While it did miss the 7% growth target that the country sets forth, the 6.9% print did beat the expectation of a 6.8% number. And given the fact that many economies in Asia are expected to roll out intervention or stimulus programs in the coming months, this could’ve bought the ECB some time for that next QE-decision.

From a technical vantage point – the short Euro trade isn’t ready yet. Since bottoming in March, we’ve been working on a bear-flag formation, which is a price action setup that sees a rising channel after an extended move lower. This is the hallmark of a ‘retracement’ that will often come into a market after a notable move.

Notice on the weekly chart below, last week gave us an inflection off of the mid-line of the channel. This could be a first step to a short position, but the down-trend is not back in the EUR/USD until this bear-flag is broken, and as of right now, the bottom of this flag projects to approximately 1.1067 for next week.

Another way of timing the trade is with SSI, as we had outlined in the article, Is the EUR/USD downtrend ready for resumption?

3. Next QE Expectation Is Looking at Japan: In a similar vein, Japan has been on the QE-outlay for nearly three years now, and inflation still has yet to satisfy expectations. With China recently revaluing the Yuan, this could be seen as more pressure on Tokyo as China is Japan’s primary trade partner. A weaker Yuan makes for a more difficult trading environment for Japan, and this is yet another reason for the country to look at an increased QE-outlay. The only problem is that the country has run out of bonds to monetize, so any future QE-efforts will likely need to be in a new, and creative way.

Up-to-this-point, the Bank of Japan has been reticent to announce any speculation of increased bond purchases, and this is what has helped to create near-term resistance on the Yen. On the chart below, notice the 120 level that’s currently holding as resistance in the pair. Should the BOJ talk up an increased intervention policy at their next meeting on October 30th, expect the Yen to weaken massively. This would be similar to their moves last year when they surprised markets with an announcement of increased QE on Halloween.

But if the BOJ does not talk up increased QE, or if they elect to hold bond purchases steady – expect USD/JPY to drop as US rate hikes get kicked further and further into the future.