The $64 Billion Drawdown Heard Around the World

- The Japanese Government Pension Investment Fund, the largest of its kind in the world, reported a $64 Billion drawdown after the volatility in equity markets in August and September.

- Just one year ago at the surprise Halloween announcement, we heard GPIF taking on a significantly more aggressive investment allocation to offset extremely low bond yields; and they did this by increasing their investments into global and domestic stocks.

- This increased investment from GPIF helped to further drive equity prices, but after this outsized drawdown, we may see the Bank of Japan become more reticent towards increasing or extending QE for fear of over-exposure to global equities.

The Japanese Government Investment Fund is a behemoth in global markets. It’s the largest fund of its kind (managed pension funds), and with over $1.1 Trillion under management, and its shifts in investment policy can carry huge impacts to markets. A mere change of a 1% allocation to this portfolio amounts to approximately $11 billion, which can create huge price movements in most markets. To be sure, this pension fund is the size of the entire Mexican economy. The fund alone can purchase all of the stock in Apple and Facebook and still have some left over. So this is a major market player whose shifts in investment policy can carry huge ramifications for markets…

We saw just such a shift a year ago, as Japanese QE was running out of government bonds to monetize, and as the fund was facing investment-return pressure after six years of ZIRP drove yields on fixed-income investments to anemic levels, the Japanese government elected to take on a more aggressive investment allocation. For a fund of this size, stability is paramount. Ten or fifteen percent swings in assets means that there are swaths of retirees that have paid into the pension that will now not be paid out, simply because of a decision of a politician to invest more aggressively. Traditionally, these types of investors (pension/defined-benefit plans) have carried relatively risk-averse investment protocols in order to avoid such swings. This means a lot of bonds and fixed-income investments. And these are investments that aren’t earning very much right now as much of the world reels from six years’ worth of ZIRP with yields languishing near all-time lows.

For Japan – this is a troubling prospect. Japan’s population is aging rapidly, and many workers are retiring out of the workforce, meaning that there is going to be an even greater need for GPIF to pay out in the coming years to keep the Japanese economy afloat. GPIF, much like Social Security in the United States, pays out more than it takes in; and when you combine lackluster investment returns with a declining asset base (by paying out more than you’re taking in), the fund was getting pressured from both sides to the point where its existence in 20 or 30 years could very much be in question.

Last October – we saw Japan take action. In a Halloween (2014) surprise announcement, the Bank of Japan announced an increase in their QE program in an attempt to further shore up their economy while also attempting to spark inflation (which may, one day, lead to higher rates). There was just one problem… the Bank of Japan had run out of Japanese bonds to buy under their QE program, as they’re already monetizing every Yen of debt that the bank was issuing. So, they needed to buy something else. And since yields were anemic and Central Banks around the world had propped up stock prices with continued onslaughts of support, the idea of investing more of this pension fund into stock-based assets actually looked like a good idea.

Last Halloween, we saw the GPIF move half of its holdings into domestic and international stocks, while reducing the allocation of fixed income in the portfolio. The fund set targets of 25% allocations into each Japanese and International stock, while reducing domestic bonds to 35% from a previous 60% allocation. The GPIF also increased its allocation for foreign bonds to 15% from 11%, with as much as 5% available for ‘alternative investments’ like private equity or real estate investments.

And as long as markets are continuing to go up, this is a good thing. The pension fund can get an extra return that can give it a more realistic chance at being able to pay out pensioners in the years to come. But when stocks aren’t continuing to go up, this can present a very grave problem as that asset base takes an outsized hit that will be difficult to recover from.

We heard as such this morning, as the GPIF announced that it had taken a $64 Billion hit to the portfolio from the stock swoon of August and September, totaling a -5.6% loss for the fund. This is the largest quarterly drawdown that the fund has ever seen since statistics have been collated since April of 2008. The chart below looks at the Nikkei, along with the accompanying pop to prices after last Halloween’s surprise announcement coupled with the August/September drop that amounted to a heavy loss for the fund. 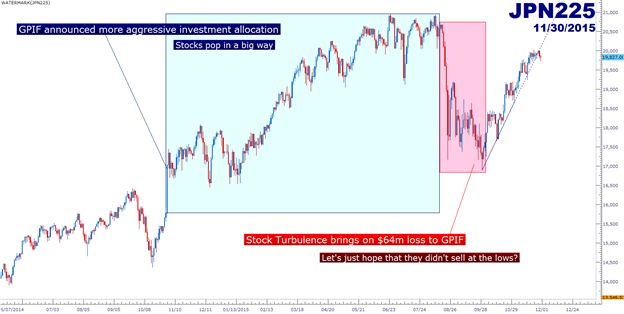 What Could the Pertinence of This Be for Financial Markets?

This could be a big deal for a few different reasons. Primarily, this may add pressure on the Bank of Japan for any future increases or extensions to QE. Frankly, there are no more bonds for them to monetize, so if they want to increase purchases they’re going to have to find something to buy. And while continued gains on stocks might sound like a really attractive idea, there is a reason that pension funds haven’t traditionally invested so aggressively; because stock prices can be volatile, and governments don’t usually perform well when they try to ‘play’ the stock market. Longer-term, these types of moves usually bring on considerably more problems than they solve.

Perhaps more to the point – any additional purchases of stocks from the Bank of Japan runs the very high risk of bringing further losses to the portfolio; and for an economy that’s already seeing their pension fund get hit from both sides (lackluster bond returns + aging population), they can ill-afford to take the swings that often come from stock investing.

This also means that it’s unlikely to see any huge inflows of capital from the GPIF in the coming months, as they’re fresh on the heels of a large drawdown on the portfolio and these are the types of exogenous shocks that can make an investor (or a fund manager) significantly more risk-averse. A shift of 1% of the GPIF’s assets equates to $11 Billion dollars; and something like this can bring considerable strength into a market, whether it’s the S&P 500 or a bond from an Emerging Market economy. Correspondingly, 1% of GPIF’s assets being moved to more conservative investments can carry massive repercussions.

And lastly regarding Japan, this hit makes the Japanese economy even more vulnerable. Japan is facing a sociological issue: There are 127.1 million people on the island of Japan right now, and that’s estimated to be as low as 86.7 million by the year 2060. That’s a reduction of 31.7% in 45 years. So, the million dollar question is how you increase an economy’s size when the population is decreasing by 1/3rd?

Likely, you can’t. This is a math problem. For the Japanese economy to be the same size 45 years from now, we’d need to see GDP-per capita increase by 50% in the next 45 years to offset this decline in the population. And even if this impossible-to-hit number was actually attained, the Japanese economy would be merely flat for the next 45 years, with no growth at all.

But perhaps more disconcerting to the world is that Japan’s neighbor in China has a very similar problem that likely won’t show for another 20 to 30 years as the ramifications of the one-child policy begin to show more prominently as China’s population ages in a similar manner as Japan. But that’s a problem for another day.

For now, the Yen’s viability as a safe-haven currency may become more attractive as a trigger-shy Bank of Japan takes a second, third or fourth look before making any additional increases to their QE program. A $64 Billion drawdown will have a tendency to change investor behavior, and in an environment in which Central Banks have become the most important players, this type of stance can carry massive repercussions.

Globally, this may dampen the attractiveness of stock-based assets as investors have gotten yet another reminder that investing in stocks is far different than investing in bonds. And after six years of ZIRP, the world may have become a little too comfortable holding riskier investments under the illusion that Central Banks will always be there to backstop stock prices.

To illustrate how this isn’t just a Japanese problem, in the chart below we’re looking at the run that we’ve seen in the DAX since that surprise Halloween announcement last year. At the time, German stocks were looking very vulnerable. But this announcement from the Bank of Japan stoked confidence in investors, and the DAX shot up by more than 35% from before the BOJ announcement to the highs hit earlier in the year.

But, as you can also see – German stocks took a drubbing later in the year as we saw as much as a ~25% drawdown as worries around China coupled with a meltdown in commodity prices permeated throughout markets. This is why pension funds have traditionally kept conservative investment profiles. 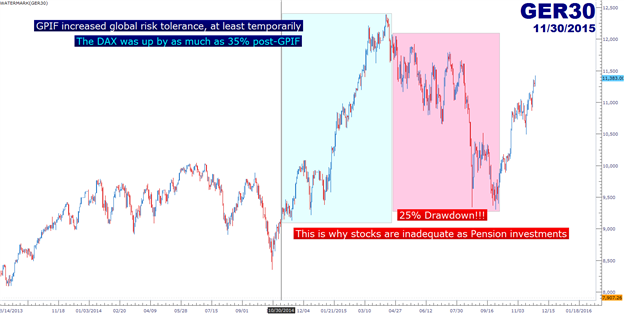