- With Growth Slowing for the Fifth Consecutive Quarter, Will RBA Become Dovish?

The near-term decline in AUD/USD may gather pace over the next 24-hours of trade as Australia’s 2Q Gross Domestic Product (GDP) report is expected to show the growth rate slowing for the fifth consecutive quarter, which may put increased pressure on the Reserve Bank of Australia (RBA) to further embark on its easing cycle.

Even though the RBA continues to endorse a wait-and-see approach in September, signs of a slowing recovery may push Governor Glenn Stevens to further insulate the real economy, and the central bank may steer towards lower borrowing-costs amid the weakening outlook for global growth.

The ongoing slump in business investments along with the slowdown in global trade may continue to drag on the Australian economy, and a dismal GDP print may trigger fresh 2015 lows in AUD/USD as it fuels speculation for an RBA rate cut.

Nevertheless, stronger job growth paired with the pickup in private consumption may generate a positive development, and a stronger-than-expected growth report may keep the RBA on the sidelines and trigger a near-term rebound in the Australian dollar as it boosts interest rate expectations.

AUD/NZD: Rinse & Repeat- Reversal Scalp Back in Play Ahead of GDP 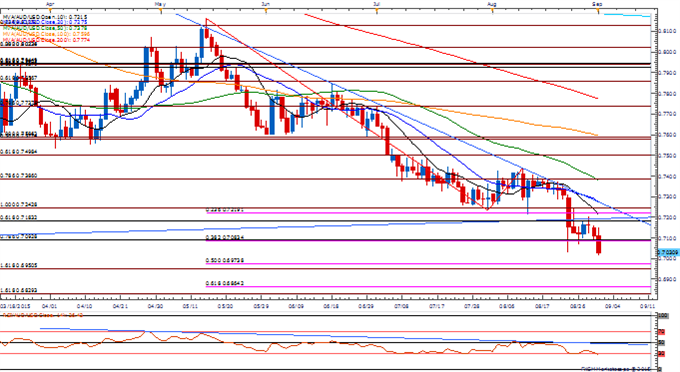 The Australian economy grew more-than-expected during the first quarter of 2015, with the growth rate climbing an annualized 2.3% after expanding a revised 2.4% in the last three-months of the previous year. Despite the upside surprise, the Reserve Bank of Australia (RBA) may largely retain the verbal intervention on the local currency while keeping the door open for additional rate cuts as the central bank continues to see below-trend growth over the policy horizon. Nevertheless, AUD/USD surged higher following the GDP print, but the lack of follow-through behind the market reaction spurred a short-term pullback in the exchange rate, with the pair closing the day at 0.7785.