Euro versus Commodity Currencies is a Mixed Picture

Each of EUR/AUD, EUR/CAD, and EUR/NZD have seen gains accumulate throughout July, but a closer look at the Euro suggests that the gains have been driven by anything other than the Euro itself.

The fact of the matter is that both EUR/JPY and EUR/USD rates have slumped over the past month, suggesting that the rally see among the other EUR-crosses has been due to weakness in the secondary currencies. Indeed, with growth concerns materializing around the delta variant surge, slumping commodity prices have weighed down the Australian, Canadian, and New Zealand Dollars.

It may prove to be the case that gains among EUR/CAD and EUR/NZD rates are setting up selling opportunities before the next legs lower. EUR/AUD rates are in a different, category, however. 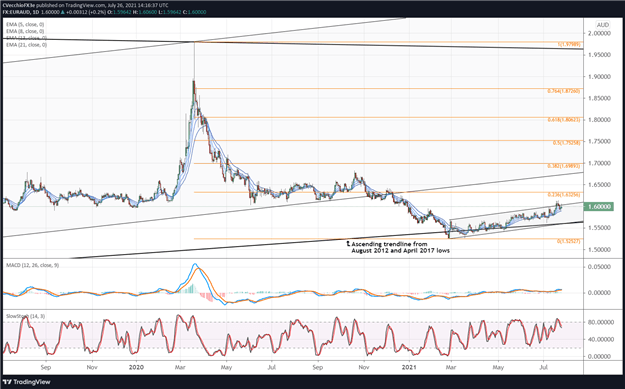 EUR/AUD rates have been trading in a slight ascending parallel channel since late-February, but price action has become increasingly bearish. Among the three EUR-crosses reviewed, EUR/AUD represents that most bullish scenario.

Although bullish momentum has waned, it remains bullish. EUR/AUD rates are still above their daily EMA envelope, which is in bullish sequential order. Daily MACD is trending sideways while holding above its signal line, while daily Slow Stochastics have pulled back from overbought territory without a corresponding correction in price action.

The market appears to be shaking off near-term overbought considerations, and instead may be gearing up for another rally towards the 23.6% Fibonacci retracement of the 2020 high/2021 low range at 1.6326. 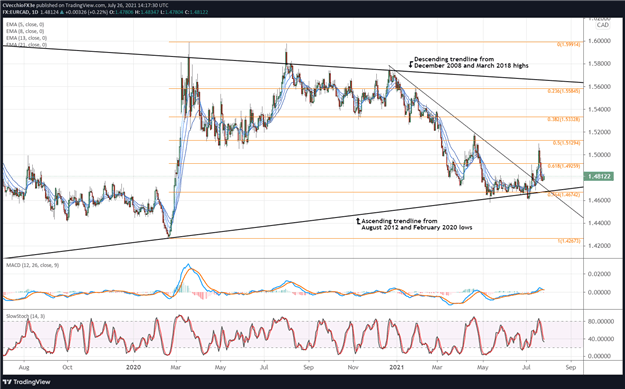 The sharp decline in the Canadian Dollar around eroding energy prices provoked a bullish breakout from the descending trendline from the December 2020, January 2021, and April 2021 swing highs. However, recent price action suggests that the rally from the early-July low may be imperiled.

EUR/CAD rates are slipping below their daily EMA envelope, which is in neither bearish nor bullish sequential order. Daily MACD has just issued a bearish crossover albeit still above its signal line, while daily Slow Stochastics are just shifted below their median line. A deeper setback towards the ascending trendline from the August 2012 and February 2020 lows, closer towards 1.46500, may soon develop. 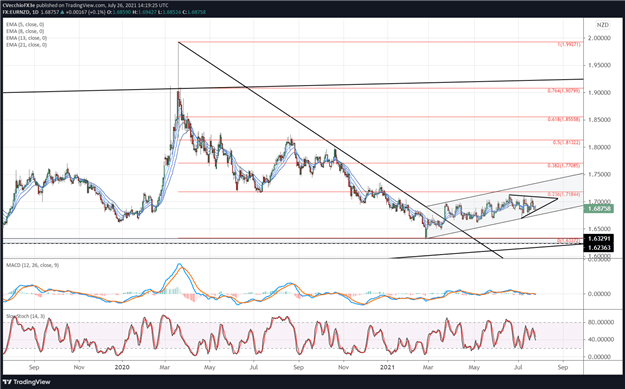 Like EUR/AUD, EUR/NZD rates have been trading in a slight ascending parallel channel since late-February, but within the uptrend a symmetrical triangle has formed since the end of June. A neutral consolidation pattern, it’s possible for a break in either direction.

Momentum is steadily eroding. EUR/NZD rates are slipping below their daily EMA envelope, which is beginning to align in bearish sequential order. Daily MACD is trending lower while below its signal line, and daily Slow Stochastics are in the process of dropping below their median line.

The pair is currently holding near triangle support, and failure here would suggest a return back to parallel trend support closer to 1.6700.