The Euro is back on the up-and-up across the major currencies covered by DailyFX Research, perhaps thanks to key issues finding resolution before the end of 2020. In recent days, the US fiscal stimulus deal has been signed into law and a Brexit deal has been reached between the EU and UK. Increased US fiscal deficits against the backdrop of the Federal Reserve’s low interest rates have plagued the US Dollar, as depressed US real yields have driven investors away from the greenback. Avoiding a ‘no deal, hard Brexit’ prevents an unintended economic shock that would obviously ripple from the UK into the EU.

We can’t forget about the coronavirus vaccine approvals either, which have been a shot in the arm to risk appetite. All in all, these have been positive, near-term fundamental developments for the Euro. Traders may be readying to take positions in the two major EUR-crosses ahead of the New Year, as EUR/JPY rates have rallied to fresh yearly highs, while EUR/USD rates are racing towards the yearly high set earlier in December. 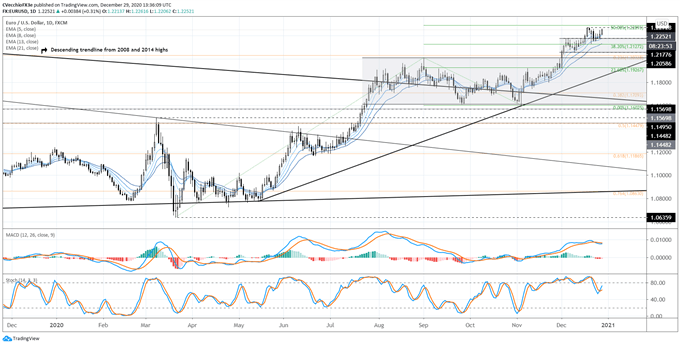 EUR/USD rates are showcasing their bullish technical posture in real time, having warded off a return to the bull flag carved out in the first two-plus weeks of December. Contextually, this has followed the bullish breakout above sideways range resistance in place since late-June. It still holds that “final targets for a simple doubling of the broader range dating back to late-June would suggest gains through 1.2600 in the coming months.” Breaking the December high at 1.2273 would be a strong indication that bullish continuation is in process.

Bullish momentum is increasing, with EUR/USD rates above their daily 5-, 8-, 13-, and 21-EMA envelope. Daily Slow Stochastics have turned higher above their median line, while daily MACD is starting to trend higher once more above its signal line. Amid more losses for the DXY Index, the path of least resistance for EUR/USD appears to be to the topside once again. 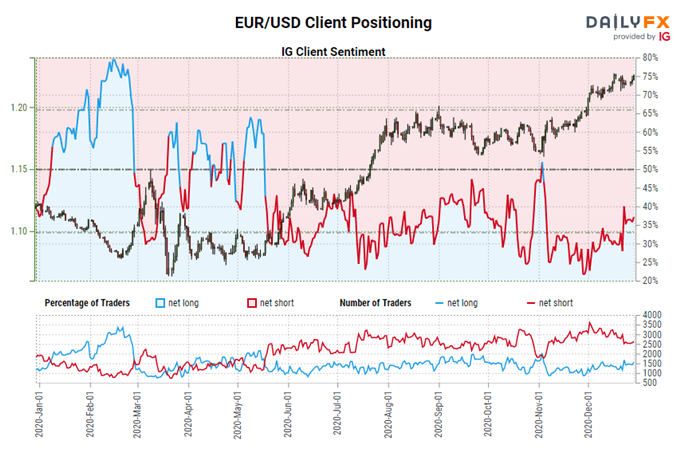 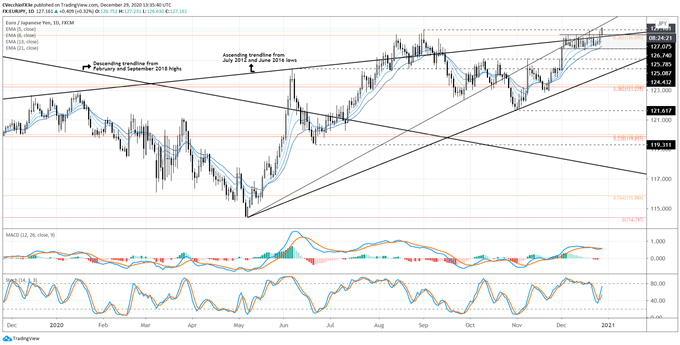 With respect to EUR/JPY rates, it’s recently been noted that “the more near-term range carved out thus far in December between 125.79 and 126.74 (95-pips) suggests an immediate upside target of 127.69…longer-term, it is still the case that a bullish breakout to fresh yearly highs above 127.08 would be a material accomplishment, one that would warrant a longer-term bullish outlook for EUR/JPY rates.”

With fresh yearly highs established today, EUR/JPY rates are now making a decisive attempt at breaking above the ascending trendline from the July 2012 and June 2016 lows, a trendline that has previously capped previous rallies dating back to September 2020. If price action has proved to be an ascending triangle since the May low, then it would be the case that EUR/JPY rates may have several hundreds of pips to the topside in terms of potential heading into 1Q’21. 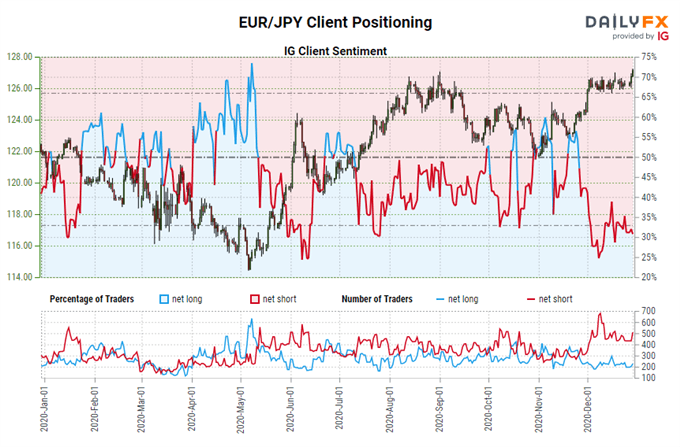