After an explosive first week of December, the Euro finds itself treading water and giving back gains at a modest clip midway through the second week of the month. That’s not to say that sellers have control; indeed, all of the major EUR-crosses are still above their daily 5-EMA, an indication of strong bullish momentum in the short-term.

Instead, traders have taken a more cautious approach following the Euro’s breakout attempts, as the specter of a ‘no deal, hard Brexit’ has crept back into the picture, while the December European Central Bank rate decision brings forth the prospect of some effort to try and cap the Euro gains (if not directly, indirectly vis-à-vis enhanced monetary policy operations). That said, these may be short-term concerns provoking the churn in EUR-crosses. Consistent with our Monday Euro forecast update, the pause in the Euro rally doesn’t necessarily mean that the bullish outlook has been negated. 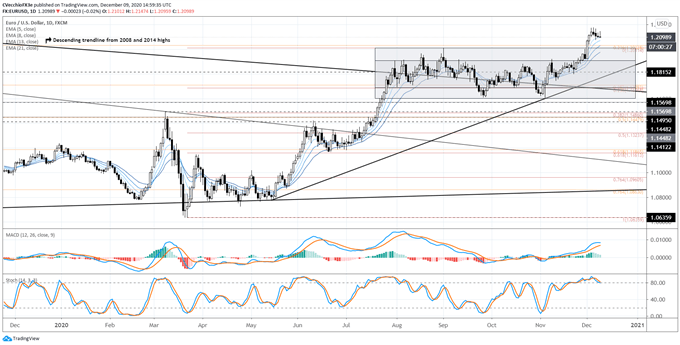 EUR/USD rates have followed up Monday’s candle – not quite a doji, not quite a bearish engulfing bar – with modest weakness. The hammer candle on Tuesday proved to be an inside day, and price action has seen another long wick form on the topside thus far today. This may simply be the digestion phase of a pair that has recently experienced a bullish breakout above sideways range resistance in place since late-June. It still holds that final targets for a simple doubling of the broader range dating back to late-June would suggest gains through 1.2600 in the coming months.

Amid several weeks of EUR/USD rates maintaining their elevation above the downtrend from the 2008 and 2014 highs (from the all-time high), the short-term weakness does little to change the longer-term bullish outlook. EUR/USD rates are holding their daily 5-, 8-, 13-, and 21-EMA envelope, which is in bullish sequential order. Daily MACD is still trending higher above its signal line, while Slow Stochastics are pulling back but still remain in overbought territory. 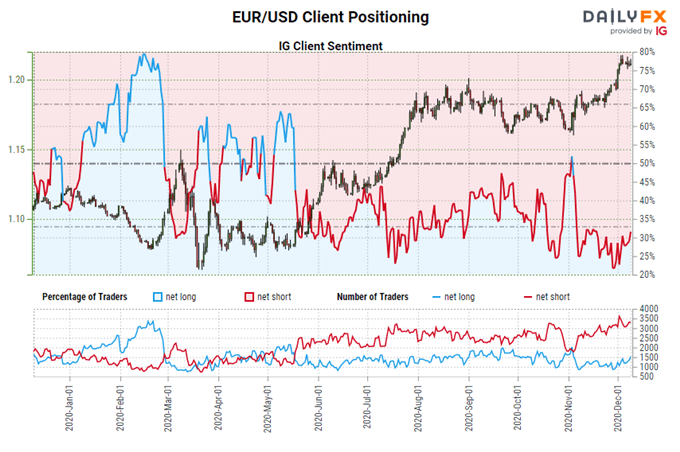 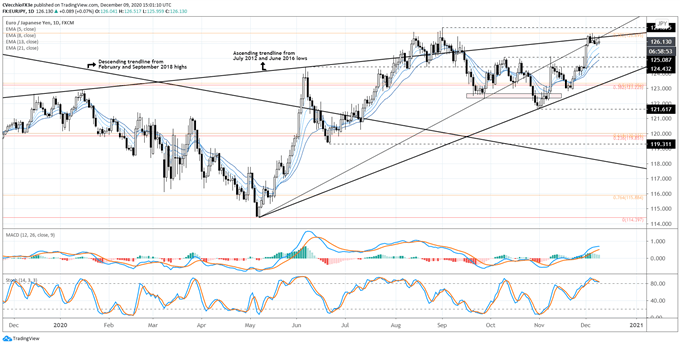 EUR/JPY rates, like their EUR/USD counterpart, have experienced light selling pressure in recent days as evidenced by the long wicks formed on the daily candles, indicative of sellers taking control by the end of the session. But momentum indicators remain bullish. EUR/JPY rates are still above the daily 5-, 8-, 13-, and 21-EMA envelope, which is in bullish sequential order. Daily MACD is trending higherabove its signal line, while Slow Stochastics are holding in overbought condition.

Despite near-term churn, EUR/JPY rates are holding near their highest level since early-September, having stalled just below the 38.2% Fibonacci retracement of the 2016 low/2018 high range at 126.70. Furthermore, EUR/JPY rates have found resistance at the ascending trendline from the July 2012 and June 2016 lows, a trendline that has been tested multiple times the past year. As a result, a bullish breakout to fresh yearly highs above 127.08 would be a material accomplishment – and one that can’t be dismissed, particularly if the ECB fails in its efforts to restrain the Euro on Thursday. 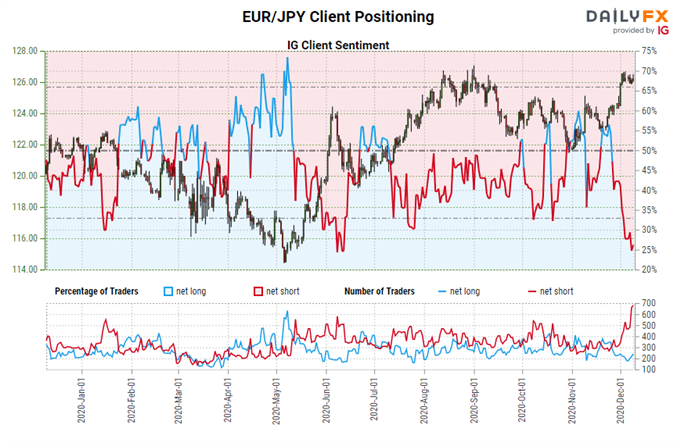