The Euro continues to build on gains after news over the past 24-hours has recalibrated expectations around the long-term viability of the single currency project. It seems a lesson may have been learned after failure to bring about a coordinated, federal-level response to the Eurozone debt crisis and The Great Recession: France and Germany have come forth with a €500 billion proposal for an emergency fund, fully backed by debt issued by the EU.

And so Europe, at a time when there’s a chance to work together, is finally action as a union. This is a materially positive development for the long-term viability of the Euro, a significant inflection point in the grand scheme of things.

Present Day: Does the ECB Need to Save the Euro?

So while Draghi’s “whatever it takes” moment was good for the Euro in the short-term, staving off ruin, it ultimately removed pressure from politicians to reform their economies.

As paradoxical as it may sound, ECB President Lagarde’s comment that “we’re not here to narrow spreads” – a suggestion that it wasn’t the ECB’s job to reduce sovereign credit risk in the periphery relative to the core – may have been one of the sparks that ignited Germany to embrace jointly-issued debt.

It may be the case now that the Euro doesn’t need a “whatever it takes” moment from Lagarde this time around, and even if the ECB were to come forward with a massive easing program, that might actually help the Euro, because it would further reduce the threat of this existential crisis.

In our commentary on the Euro over the past weeks, we’ve maintained the following perspective: “The coronavirus pandemic has exposed an old wound: the desire by the less fiscally stable member states to have a federalized European budget. Germany, Austria, and the Netherlands remain opposed to jointly-issued debt among member states, otherwise known as “Eurobonds” – just as the bloc of northern member states did throughout the crisis of the past decade.

“And so, the European Union may be nearing a breaking point anew. A lack of a federalized response mechanism, blockaded by the more fiscally stable members of the EU, may be the spark that forces countries to turn inward even faster – and tear the union apart.”

The stakes have been raised: the region’s two largest economies are answering the call for federalized debt. But if the Northern core countries reject the proposal, all of the good will in the world may not be able to save the Euro – neither will the ECB. 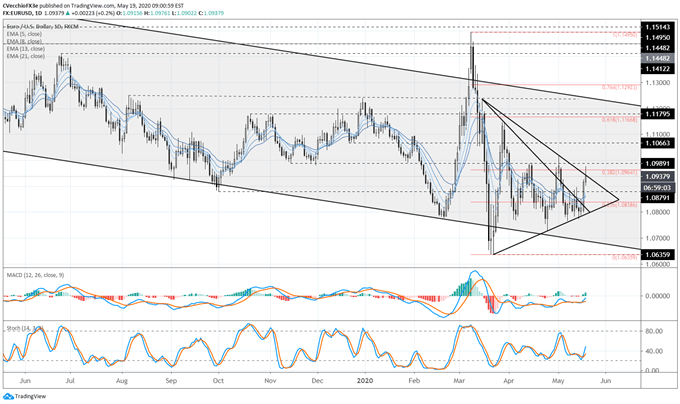 In our last EUR/USD rate forecast update, it was noted that “the uptrend from the March, April, and May swing lows has been maintained, and the bullish outside engulfing bar forming on the daily chart suggests that a return back towards triangle resistance is possible (which would come in the low 1.0900s over the remainder of the week).” EUR/USD rates climbed through 1.0900 yesterday, but triangle resistance remains: a shooting star is forming on the daily candle, with price sitting at 1.0938 at the time of writing.

Bullish momentum continues to build, as EUR/USD rates are still rising above their daily 5-, 8-, 13-, and 21-EMA envelope, which is not yet in full bullish sequential order. Both daily MACD and Slow Stochastics are advancing back towards their respective signal and median lines while in bearish territory.

Gains through 1.0964 would not only constitute a bullish breakout from the triangle, but success in overtaking the 38.2% retracement of the 2020 high/low range as well. 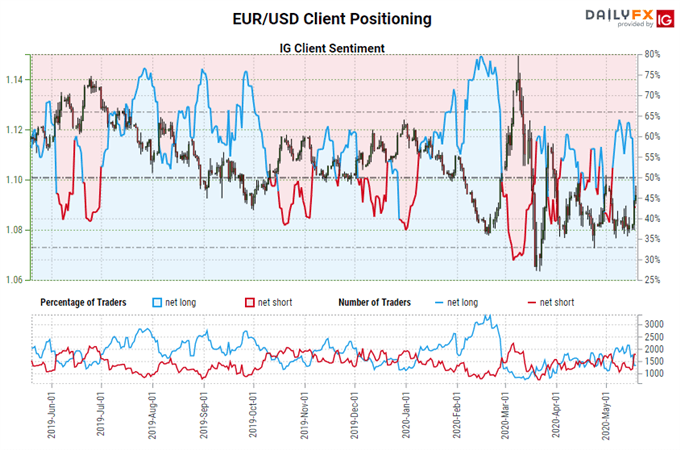 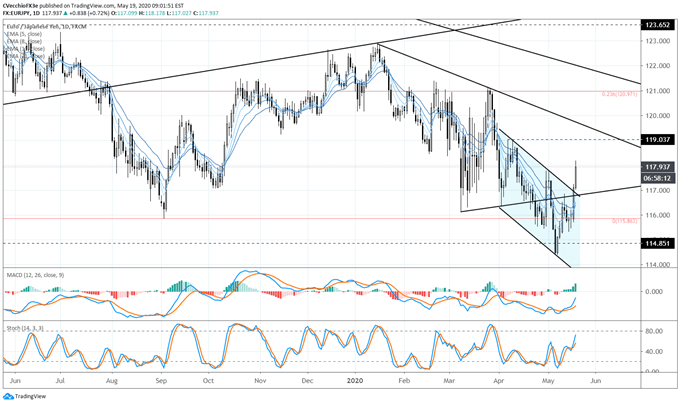 In our last EUR/JPY rate forecast update, it was noted that “the sharp rally over the past few days has EUR/JPY back at symmetrical triangle support (now resistance) near 116.60, while the descending channel in place since the start of April sees resistance emerging near 117.10 over the coming days…if 117.10 is achieved, a return back into the symmetrical triangle coupled with a break of the descending channel would buttress the argument for a more substantial EUR/JPY turn high.”

The foundation has been laid for a more substantial EUR/JPY turn higher, will prices clearing out 117.10 with ease. The descending channel in place over the past seven weeks has been busted, and EUR/JPY has returned back into the symmetrical triangle. As is often the case, returning to a consolidation typically means a reversal to the otherwise of the consolidation is possible.

In terms of indicators, EUR/JPY rates are climbing above the daily 5-, 8-, 13-, and 21-EMA envelope, which is not yet in full bullish sequential order. Daily MACD is trending higher albeit in bearish territory, while Slow Stochastics is racing towards overbought condition. A move towards the April swing highs near 119.02 can’t be dismissed. 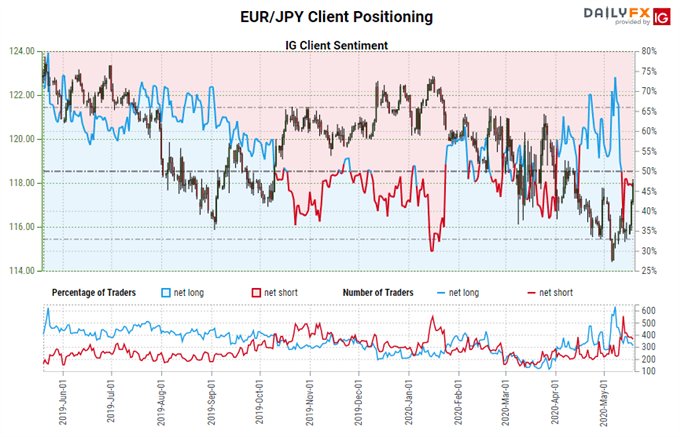